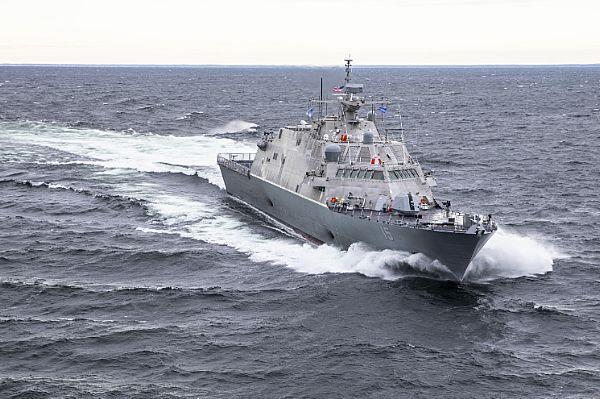 The Billings, which was delivered to the Navy in February and is designated as LCS 15, made contact with the bulk carrier Rosaire Desgagnes as it was leaving its slip at 2 p.m. Friday, a U.S. Navy official told USNI News.

Two tugs were assisting the warship named for the city in Montana when the starboard side of the warship made contact with the port side of the carrier moored at the pier at Montreal’s Sainte-Marie neighborhood.

“Billings sustained minor damage above the waterline,” Lt. Cmdr. Courtney Hillson told USNI News. “While the ship is able to safely transit to its homeport, Naval Station Mayport, Fla., the ship will temporarily remain in port in Montreal to conduct a full damage assessment.”

Earlier this month, the Billings got underway from Fincantieri Marinette Marine in Wisconsin to transit to her future home port. The ship is due to be commissioned in Key West on Aug. 3.

Hillson said no injuries were reported from either vessel and an investigation into the incident is ongoing.

A video, which appears on the Facebook page Shipspotting Canada, shows the Billings going up against the side of the Rosaire Desgagnes. The direction of her exhaust stream suggests a strong wind would have set her toward shore.

Witnesses said the Billings lost control after the lines were let go and hit the vessel that was behind it, according to First Coast News in Jacksonville, Fla.

Construction of the Billings began in 2014 and the launching was in 2017.

Fincantieri Marinette Marine, an American subsidiary of Italian shipbuilder Fincantieri Marine, is a subcontractor responsible for building the ship. Lockheed Martin is the prime contractor. Five Freedom-variant destroyers are being constructed in the Wisconsin shipyard.

Freedom-class LCSs sail through the Great Lakes and up the St. Lawrence Seaway to get out into the Atlantic Ocean.

The USS Billings Facebook page makes no mention of the incident but includes photos and video of it transiting the Great Lakes.

In January 2018, another Freedom littoral combat ship, the USS Little Rock, was stranded for four months in Montreal waiting for St. Lawrence River to thaw. It had departed from a commissioning ceremony in Buffalo, N.Y.

The USS Montgomery, an Independence-class LCS, has been involved in two collisions in October 2016.

A tug collided with the Montgomery while leaving Mobile, Ala., to escape Hurricane Matthew, causing a foot-long crack in her hull. After temporary repairs, the Montgomery she hit the wall of one of the locks in the Panama canal, causing an 18-inch-long crack.