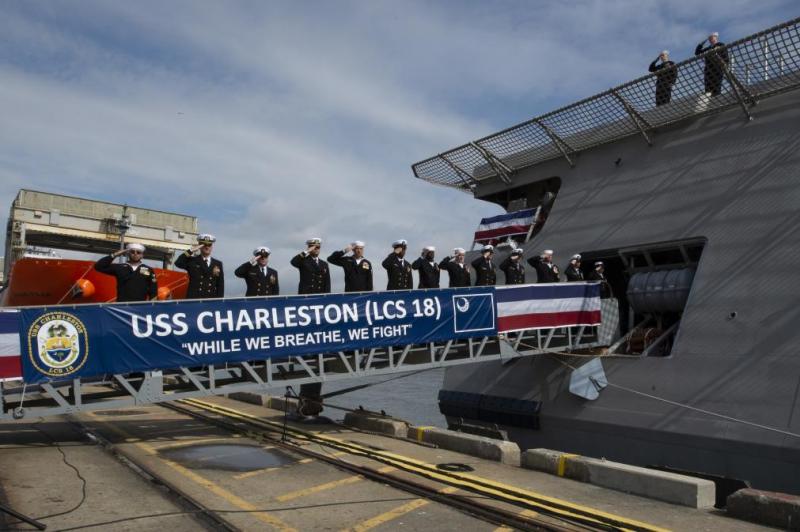 March 4 (UPI) — More than 5,000 guests watched as the USS Charleston, the 16th littoral combat ship to enter the U.S. Navy’s fleet, was commissioned in its namesake city.

Charlotte Riley ordered “man our ship and bring her to life!” during the ceremony Saturday at the Columbus Street Terminal in South Carolina’s oldest and biggest city. Her husband, Joseph P. Riley Jr., who served 10 consecutive terms as Charleston’s mayor, ordered the traditional setting of the first watch.

“It didn’t take long to know that there was something special,” Busca said about the crew, some of whom has have been on the ship for more than two years. “They had an infectious positivity that seemed to never end.

Busca said the ship, which will be homeported in San Diego with other LCSs, can handle any enemy threat.

“I will bring up all four main engines online, I will come to full power, I will point the bow straight at you steam full speed ahead. And that gun will be blazing and my eventual missiles will be launching,” Busca said in is closing remarks. “Charleston will not turn and run. We will not run because while we breathe, we fight!”

“There is a reason more than 40 ships have been named for South Carolina, whether it’s our places or our people,” Scott said. “It’s because so many South Carolinians have been dedicated to making sure that America remains the safest nation on Earth.”

Charleston Mayor John T. Tecklenburg noted that since the founding of Charleston almost 350 years ago, naval ships have been a major part of its economy and culture.

“The sea is history,” Tecklenburg said in quoting poet Derek Walcott. “Nowhere will you find a people who understand those words more fully than the people of Charleston.”

LCS-18, which is the sixth Navy vessel to carry the name Charleston, adopted South Carolina’s motto — “As I Breathe, I Hope” — and made it its own adding a combative twist — “As We Breathe, We Fight!”

Charlotte Riley christened the ship in 2017 and U.S. Rep. Bradley Byrne of Alabama authenticated the Charleston’s keel by welding his initials onto an aluminum plate for hull of the ship in June 2016.

The Charleston is the ninth Independence-variant littoral combat ship, which consists of even-numbered hulls, and are manufactured by Austal USA, in Mobile, Ala. Lockheed Martin produces the Freedom variant in Marinette, Wis.

The ships can perform in near-shore and open-ocean operation, and handle “anti-access” threats such as mines, quiet diesel submarines and fast surface craft.