Jan. 17 (UPI) — California-based Virgin Orbit made its first successful flight to orbit Sunday using a rocket launched from a plane over the Pacific Ocean, announcing later that the satellites aboard were released successfully.

The rocket soared into space at 2:40 p.m. EST after the company’s Cosmic Girl aircraft, a modified Boeing 747-400, released it from beneath a wing.

“Payloads successfully deployed into our target orbit!,” Virgin Orbit tweeted at 5:29 p.m. “We are so, so proud to say that LauncherOne has now completed its first mission to space, carrying 9 CubeSat missions into Low Earth Orbit for our friends @NASA.”

Forty minutes earlier, the company tweeted, “We can confirm our NewtonFour upper stage engine successfully relit at the right time and for the right duration. The payload separation command was issued as planned.

“LauncherOne has been released from Cosmic Girl and its NewtonThree main stage engine has ignited. The 10 CubeSats of ELaNa 20 are on their way to space!” NASA’s Launch Services tweeted shortly after the launch.

Virgin had scrubbed a previous attempt to launch the mission in December when employees entered quarantine because of COVID-19 exposure. The company also delayed the launch from last week.

The aircraft took off from Mojave Air and Space Port, 90 miles north of Los Angeles, carrying the LauncherOne rocket. After the plane released the rocket over the Pacific, the 747 veered upward and away from the launch path.

Upon reaching space, the rocket’s second stage moved the satellites into their intended orbit, releasing them in batches of three.

The launch was the first time a Virgin Orbit rocket carried a commercial payload. The company launched a similar rocket once before in May without a paying customer, but it failed to reach orbit after disengaging from the plane.

The 10 satellites, called CubeSats, included nine that were were designed and built by eight universities in the United States, along with one built by NASA’s Ames Research Center in Moffett, Calif.

One of the satellites is the University of Central Florida’s Q-PACE experiment, which has video cameras inside to observe how quartz marbles interact with smaller spheres, dust and other materials in the microgravity of low-Earth orbit.

The device is intended to help explain how electrostatic energy causes dust and rocks to clump together, eventually forming planetary bodies or planetary rings like Saturn’s and Neptune’s.

The University of Colorado at Boulder’s PolarCube satellite will study weather and storms from space. It was designed originally to fly over the North Pole and South Pole but that orbit couldn’t be reached on the Virgin Orbit mission.

Other satellites included two devices intended to inspect other spacecraft in space, two that will measure space radiation and one that will monitor storms.

The space experiments are only about a foot long and just a few inches high and wide.

Over the past few decades, NASA has launched many similar flights, which it calls Educational Launch of Nanosatellites (ELaNa) missions.’ 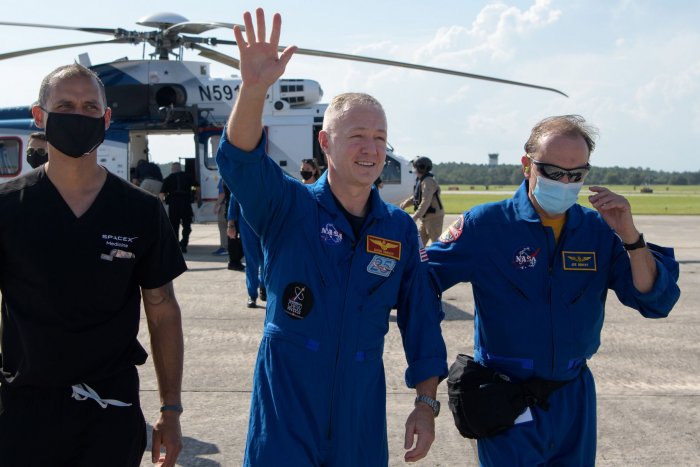