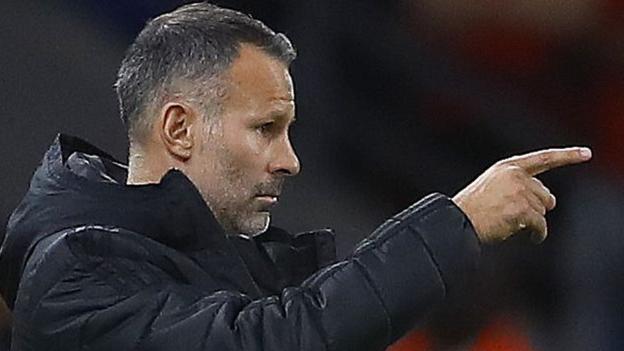 Wales manager Ryan Giggs says the hard-fought point earned against Croatia could “prove vital” to his side’s bid to qualify for Euro 2020.

Gareth’s Bale’s excellent equaliser just before half-time held the group leaders to a draw in a bad-tempered game which saw eight players booked.

Wales remain fourth in Group E and they are relying on Slovakia to drop points if they are to qualify.

“I am pleased with the performance and the character we showed,” said Giggs.

“It was a very physical game.

“We were against a very good side who are talented, streetwise. They have a lot of caps between them and are World Cup finalists, but we showed great character coming back from 1-0 down, we didn’t panic.

“You want to be greedy and win these games – but I am more than happy with a point.”

While Wales’ hopes of qualifying are no longer entirely in their own hands, they would still finish second and qualify for Euro 2020 if they win both of their remaining qualifiers – in Azerbaijan and at home to Hungary – and Croatia beat Slovakia in November.

Giggs felt the performance against Croatia in Cardiff, alongside the good display in Thursday’s 1-1 draw with Slovakia in Trnava, meant the camp was the most successful since he took charge of the national side in January 2018.

He was able to name an unchanged starting XI for on the second time in 17 matches, though Wales were without Aaron Ramsey, Chris Mepham and David Brooks – three of their key performers.

“In Slovakia we showed quality. Tonight was different and we had to dig in, work hard and show concentration. The lads put a shift in,” said Giggs told BBC Sport Wales.

“That point could be vital. We are relying on Croatia to beat Slovakia, but we must win our two games, that’s what we are concentrating on and that won’t be easy.

“It is the first time I’ve been near naming the same team, which is good as everyone knows their jobs – but the physical aspect is tough, especially as not everyone is playing regularly for their clubs.

“I am delighted we could do that. In terms of the philosophy, you need to find a balance. You can’t go toe-to-toe with certain teams.”

Giggs had largely good news for concerned club managers after a bruising encounter for his side.

Goalscorer Bale was limping at the end of the match but only suffering from cramp, while Giggs said Manchester United winger Daniel James passed half-time concussion tests after receiving a hefty challenge in the first period.

Giggs said James was being “streetwise” in staying down after his collision with Domagoj Vida, adding that the 21-year-old was “fine”.

Ethan Ampadu, who is on loan at RB Leipzig from Chelsea, was forced off after a heavy collision and the 19-year-old midfielder will be assessed.