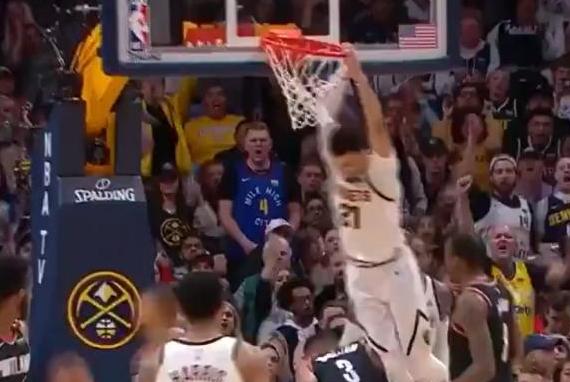 May 8 (UPI) — Denver Nuggets point guard Jamal Murray came out of nowhere and threw down a monstrous putback slam against the Portland Trail Blazers in Tuesday night’s Game 5.

Nuggets forward Paul Millsap grabbed a rebound and raced up the court in the third quarter. He drove into the lane and shot a contested layup that bounced off the backboard and the front of the rim.

Murray patiently waited and sprinted at the hoop. The guard secured the rebound after his timely jump and emphatically dunked the ball over Trail Blazers guard CJ McCollum.

The Nuggets held a commanding 110-86 lead with under six minutes left in the fourth quarter. Murray had 18 points (7-of-15 shooting), nine assists and five rebounds in 31 minutes.

Murray has emerged as a key contributor for the Nuggets this postseason. He had 34 points in Games 3 and 4 for Denver.

The best-of-seven series is tied 2-2. Game 6 is Thursday night at the Moda Center in Portland.