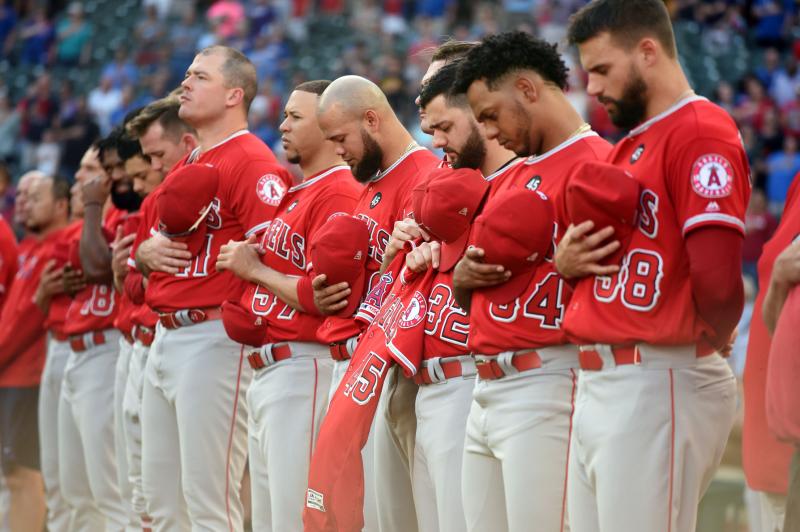 July 3 (UPI) — The Los Angeles Angels returned to the field for the first time since the death of pitcher Tyler Skaggs, beating the Texas Rangers 9-4 Tuesday.

Angels players wore patches with Skaggs’ No. 45 on their jerseys at Globe Life Park in Arlington, Texas. They also held up one of his jerseys during a moment of silence and the national anthem.

Skaggs, 27, was found dead in his room at the team hotel, hours before the Angels were set to play the Rangers Monday in Arlington. Police said there were no signs of foul play and they do not suspect suicide. The Angels and Rangers postponed Monday’s game.

“It’s tough. My first at-bat, I get up there, and all I do is think about him,” Angels star Mike Trout told reporters. “Just a different feeling, you know. Just in shock. Walking around the hotel, you’re just always thinking about him. It’s going to be tough.”

Albert Pujols sparked the Angels early Tuesday, giving Los Angeles a 1-0 lead with a first inning RBI force out. Nomar Maraza tied the game on a sacrifice fly in the bottom of the first frame.

Rangers center fielder Delino DeShields gave Texas a 2-1 edge with a solo home run in the bottom of the third inning. Elvis Andrus also stole home in the inning, giving Texas a 3-1 advantage.

Then the Angels came roaring back.

Rougned Odor plated the Rangers’ final run with a sacrifice fly in the bottom of the sixth inning. Kole Calhoun brought in the final runs of the game with a two-run homer for the Angels in the top of the eighth frame.

Calhoun was 2-for-4 with two RBIs, a run scored, a walk and a strikeout in the win. Trevor Cahill earned the win on the hill, allowing one hit and one run in two innings of work for the Angels.

The Rangers host the Angels again at 8:05 p.m. Wednesday in Arlington.