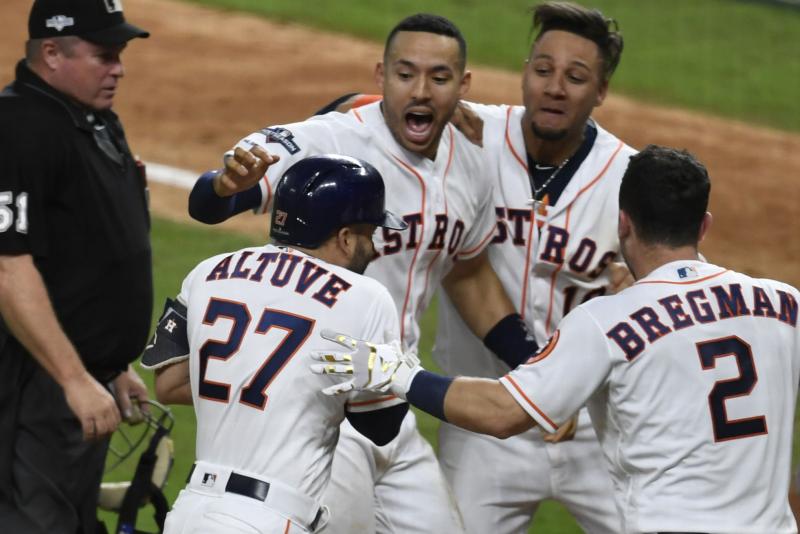 Altuve was named ALCS MVP for his performance. Houston hosts the Washington Nationals in Game 1 of the World Series at 8:08 p.m. EDT Tuesday.

The Astros used stellar defense and an early home run to take control of the game at Minute Maid Park in Houston. Yankees first baseman D.J. LeMahieu tied the score at 4-4 in the top of the ninth frame before Altuve gave the Astros a 6-4 victory with a 406-foot bomb to left field.

“In the at-bat, I just wanted to get a good pitch to hit,” Altuve told Fox Sports. “I wanted to be on time for the fastball but I was looking for something I could hit.

Astros first baseman Yuli Gurriel hit a three-run homer in the first inning and Houston held onto the lead until the final frame.

The Yankees answered Gurriel’s homer with Gary Sanchez ripping an RBI double to score Didi Gregorius in the top of the second inning. Gio Urshela blasted a 395-foot solo shot off Astros reliever Jose Urquidy in the top of the fourth frame to make the score 3-2.

Astros right fielder Josh Reddick made a spectacular diving catch to prevent a game-tying run in the top of the sixth inning. Astros star Alex Bregman grounded into a force out in the bottom of the inning, but Altuve scored on the play, pushing Houston’s lead to two runs.

Astros left fielder Michael Brantley provided another defensive gem in the top of the seventh inning. Yankees center fielder Aaron Hicks hit a ball to left field on the play. The ball looked like it was about to drop in front of Hicks, but the Astros outfielder dove to catch it before throwing to first base for an inning-ending double play.

Chapman entered the game for the Yankees in the bottom of the final inning. He struck out Martin Maldonado in his first exchange before forcing Reddick to pop out. Chapman walked George Springer before settling in against Altuve.

The Astros star worked for a 2-0 lead in the count before Chapman threw a slider for a strike. Chapman tossed in another slider for his fourth offering of the exchange. Altuve smacked the offering over the right field fence, prompting the crowd to erupt, and winning the game for Houston.

“I get asked to describe Jose Altuve all the time,” Astros manager A.J. Hinch said. “MVP is what he is.”

The Astros are looking to win their second World Series title in three years. The Boston Red Sox beat the Astros in the 2018 ALCS and went on to win the World Series. Houston beat the Los Angeles Dodgers in seven games during their 2017 World Series run.

The Nationals swept the St. Louis Cardinals in the NLCS to reach the World Series for the first time in franchise history.