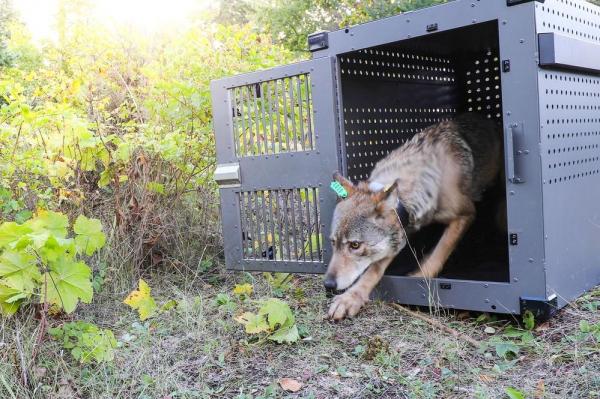 On Wednesday, wildlife officials captured two wolves, a four-year-old female and five-year old male, from two different packs living on Minnesota’s Grand Portage Indian Reservation. The wolves were airlifted to and released on the remote island, all of which is a national park.

NPS shared photos and video of the release on their website.

Wolves and moose first made their way to the island more than a century ago, trekking across the winter ice from the mainland. NPS scientists began studying the wolf and moose populations, as well as predator-prey interactions, in the 1950s, and have been ever since.

But while the moose population remains relatively stable, the wolf population has dwindled to two. Earlier this summer, park officials approved a plan to introduce new wolves and their fresh genetic material in hopes of growing the population and restoring predator-prey balance.

“We have been planning this relocation operation with our partners and are very pleased with the progress so far,” park superintendent Phyllis Green said in a news release. “Releasing these two wolves on the island is the first step to restoring the ecological dynamic in the park.”

The wolf reintroduction will allow scientists to continue studying wolf-moose interactions. Scientists detailed their plans for the ongoing study this week in the journal Science.

“Inbreeding as well as warmer winters, which mean less lake ice and fewer opportunities for mainland wolves to restock the population, have essentially ended the classic natural experiment,” scientists wrote in the paper. “With the reboot, NPS hopes to attract researchers with new questions to explore.”

Four more wolves will be airlifted before the end of autumn. Wildlife officials aim to repeat the process next year and the year after. In all, NPS plans to introduce 20 to 30 wolves to the island.

“This decision is an important step forward in attempting to obtain a proper predator-prey dynamic within the Isle Royale National Park ecosystem,” Cam Sholly, Midwest program direction at NPS, said earlier this year. “We appreciate the intense public involvement throughout this process and look forward to continued outreach as this decision is implemented.”