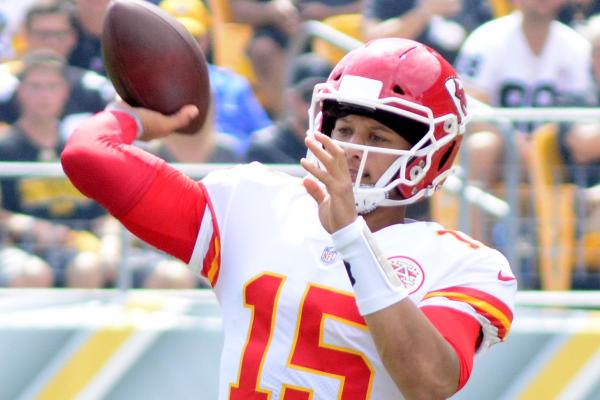 Sept. 16 (UPI) — Quarterback Patrick Mahomes continued his electric start to the 2018 season as the Kansas City Chiefs defeated the Pittsburgh Steelers 42-37 in a high-scoring affair.

The second-year gunslinger tied a franchise record with six touchdown passes against the Steelers. Mahomes’ 10 passing touchdowns in the first two weeks of the season are the most ever by a quarterback through two games in league history.

“You never expect to have 10 touchdowns at this point in the season,” Mahomes told reporters. “But I knew with this offense and the weapons that we have and the scheme [Chiefs] coach [Andy] Reid has drawn up that we had a chance to be really, really good and the possibilities are endless.”

Mahomes spread the ball around throughout the contest, throwing touchdown passes to five different receivers. Tight end Travis Kelce recorded a team-high 10 targets and converted them into seven catches for 109 yards and two scores.

It was Watkins’ first 100-yard game since Week 3 of the 2017 season on Sept. 21 against the San Francisco 49ers while playing with the Los Angeles Rams. He had six grabs for 106 yards and two scores in that game.

Steelers quarterback Ben Roethlisberger completed 39-of-60 passes for 452 yards and three touchdowns. He also had two carries for nine yards and a rushing touchdown.

JuJu Smith-Schuster led all Steelers wideouts with 13 catches for 121 yards and a score. Antonio Brown had nine receptions for 67 yards.

The Jacksonville Jaguars avenged last season’s loss to the New England Patriots in the AFC Championship Game with a dominant performance Sunday afternoon.

Running back T.J. Yeldon — filling in for the injured Leonard Fournette — ran 10 times for a game-high 58 rushing yards.

Patriots quarterback Tom Brady was limited to 234 yards on 24-of-35 passing with two touchdowns.

Another week, another tie.

After the Cleveland Browns and Pittsburgh Steelers tied in a rainy game last weekend, the Packers and Vikings followed suit.

Vikings quarterback Kirk Cousins was 35-of-48 for 425 yards, four touchdowns and an interception.

Matt Ryan and the Falcons rebounded from a Week 1 loss to the Philadelphia Eagles with a division win against the Carolina Panthers.

Ryan shined in the win, completing 23-of-28 passes for 272 yards and two passing scores. He added four carries for 18 yards and two rushing touchdowns.

Rookie first-round receiver Calvin Ridley grabbed his first NFL reception and touchdown against the Panthers. He had four catches for 64 yards and a score.

Panthers quarterback Cam Newton was 32-of-45 passing for 335 yards, three touchdowns and an interception. He also ran five times for a team-high 42 rushing yards.

Andrew Luck and the Indianapolis Colts picked up their first win of the season against the Washington Redskins.

For Luck, it was his first win since returning from a torn labrum. His last victory came in Week 17 of the 2016 NFL season against the Jacksonville Jaguars.

Against the Redskins, Luck was 21-of-31 for 179 yards with two touchdowns and two interceptions.

Despite a handful of injuries, the Tennessee Titans prevailed against the Houston Texans.

Titans backup quarterback Blaine Gabbert was 13-of-20 for 117 yards and a touchdown.

Texans second-year signal-caller Deshaun Watson completed 22-of-32 passes for 310 yards with two touchdowns and one interception.

The veteran quarterback was 27-of-33 for 402 yards with four touchdowns and a pick. Mike Evans had 10 receptions for 83 yards and a score.

Nick Foles — who continues to fill in for the injured Carson Wentz — completed 35-of-48 passes for 334 yards and a touchdown.

Ryan Tannehill was 17-of-23 for 168 yards and two touchdowns in leading the Dolphins to a win over the New York Jets.

Dolphins running back Kenyan Drake had 11 carries for 53 yards and a score.

Melvin Gordon had himself a day in leading his club to a victory over the struggling Buffalo Bills.

The Chargers running back compiled three touchdowns (one rushing, two receiving) in the win. He had nine rushes for 28 yards, and added six catches for 38 yards.

Bills rookie Josh Allen was 18-of-33 with 245 yards, one passing score and two picks in his first official start.

A 44-yard field goal by New Orleans Saints kicker Wil Lutz proved to be the difference as the Saints defeated the Cleveland Browns.

Browns quarterback Tyrod Taylor fared better in his second start with his new club, completing 22-of-30 passes for 246 yards with one touchdown and an interception. He added four carries for 26 yards.

The San Francisco 49ers hung on to beat the Detroit Lions Sunday afternoon after a late comeback attempt by Matthew Stafford in the fourth quarter.

Stafford was 34-of-53 passing with 347 yards and three touchdowns. Receiver Golden Tate had seven receptions for 109 yards to pace the group.

Gurley had 19 carries for 42 yards and three touchdowns on the ground. He added three catches for 31 yards.

Jared Goff enjoyed similar success, finishing 24-of-32 with 354 yards, one touchdown and an interception.

Cardinals quarterback Sam Bradford struggled once more, completing 17-of-27 throws for a dismal 90 yards and an interception.

The Denver Broncos rallied for their second win of the season against the Oakland Raiders.

Denver quarterback Case Keenum was 19-of-35 passing for 222 yards and one pick.

Raiders signal-caller Derek Carr improved in his second game, throwing for 288 yards on 29-of-32 passing with one touchdown.