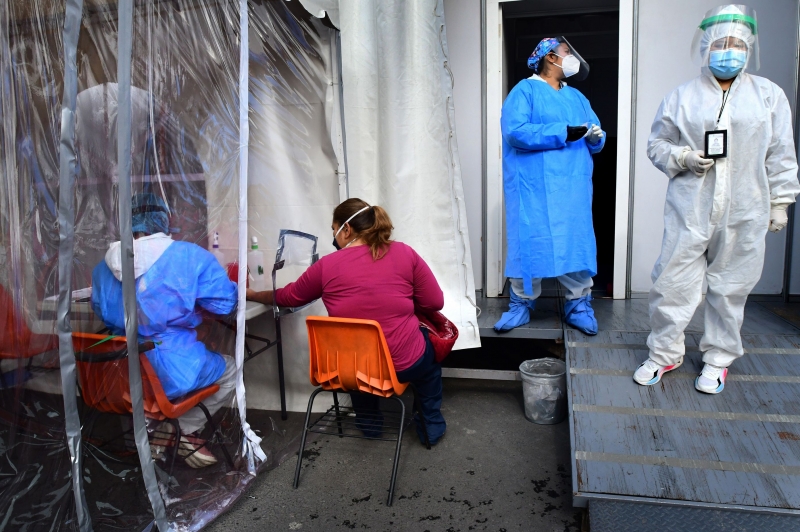 Aug. 2 (UPI) — The coronavirus pandemic, which began in Asia last December and first spread to Europe, is now primarily ravaging Western Hemisphere nations with the United States, Brazil and Mexico in the top 3 for most deaths.

In Mexico, 274 deaths and 4,853 cases were reported late Sunday one day after a record 9,556 cases. The nation has climbed up the top 10 list the last several weeks.

In all, the country has reported 439,046 cases — which is in sixth place in the world — but health officials have warned that this is not an accurate count due to shortages of testing and under reporting of the virus.

On Friday, nine state governors called for the resignation of Mexican Health Secretary Hugo Lopez-Gatell, who has minimized the severity of the coronavirus pandemic

Mexican President Andres Manuel Lopez Obrador also has been criticized and has refused to wear a mask.

“You know when I’m going to put on a mask? When there is no corruption. Then I’ll put on a mask and I’ll stop talking,” Obrador told reporters Friday.

Obrador has had a similar stance as Brazil President Jair Bolsonaro, who also flouted wearing a face covering but has contracted the virus.

“I’ve just taken a blood exam,” he said in a Facebook Live video on Thursday. “I was a bit weak yesterday. They have also found a bit of an infection. I’m taking antibiotics now. It must have been those 20 days inside the house, we catch other things. I’ve caught mold, mold in my lungs. It must be that.”

The president tested positive for the virus on July 7. Eighteen days later, he announced via Twitter that he had tested negative.

His wife, Michelle Bolsonaro, has also tested positive for COVID-19, according to a statement from the president’s press office.

The president said he has been taking hydroxychloroquine though medical studies have shown the drug is ineffective against the virus and might even be harmful.

South America has reported a total of 146,803 deaths compared with 221,901 in North America, where the pandemic has largely been concentrated in the U.S. and Mexico.

Canada has reported 8,945 deaths, including four fatalities Saturday, as well as 285 cases.

On Friday, Canada extended its ban on visitors from the U.S. to Aug. 31.

In July, the two countries agreed to extend restrictions on non-essential travel to Aug. 20.

In addition, a ban exists between the United States and Mexico through the same date.

Like Mexico, Brazil and the U.S., the pandemic has been sweeping through India.

“After getting the initial symptoms of the coronavirus, I got the test done and was found positive,” Shah posted on Twitter. He said he has been admitted to a Delhi hospital.

Asian nations have reported 99,324 deaths but only 1,228 fatalities were announced Sunday. That includes No. 10 Iran with 208 deaths.

Though the numbers are down, Asian countries have reported a relative spike in cases.

China reported 49 cases Sunday but on Friday announced 127, the most since early April, with other days last week above 100. The country, which was the original epicenter of the virus, hasn’t reported a death since April 26. Its death toll is in 26th place with 4,634 as well as 84,385 cases.

Elsewhere, Japan recorded 1,540 new coronavirus cases Saturday, the country’s Ministry of Health announced Sunday. This is the third day in a row the nation has exceeded 1,000 cases.

About one-fifth of the latest cases were in Tokyo, 472, which is the highest in the nation’s capital.

Last week, Japan passed four-digits in deaths and has risen 1,011, including an additional 5 Saturday.

The Philippines also reported the largest single-day increase in cases, 5,032, since the pandemic began. The nation has a total of 103,185 as well as 2,059 deaths, including an additional 20.

Four European nations are in the top 10 in deaths.

Britain reported eight deaths Sunday, among the lowest since the pandemic, after a daily high of 1,172 and is in fourth place with 46,201. No. 6 Italy, which at one time was the world’s epicenter and a high of 919 deaths in one day, also reported eight, among the lowest since the outbreak. Also in the top 10 are No. 7 France and No. 8 Spain, who didn’t report any data.

Some other European nations at one time were in the top 10 in deaths, but Belgium has dropped to 13th, Germany 15th and Netherlands 18th.

Britain brought back coronavirus restrictions in parts of northern England on Thursday amid a spike in cases.

“I am worried about a second wave. I think you can see a second wave starting to roll across Europe,” U.K. Health Secretary Matt Hancock told British broadcaster Sky News.

On Thursday, Britain reported 846 new positive cases — the highest number of daily infections since June 28. The increase Sunday was 743.

Because of this, 387 passengers from two July expeditions on the cruise ship have been asked to self-quarantine.

The ship is currently docked in Tromso, Norway.

The nation hasn’t reported a death since July 17 to remain at 255.

Neighboring Sweden, which has been doing “herd immunity,” reported no data after nine deaths Friday for a total of 5,743 in 20th and 45 new cases.

Cases have been spiking in Australia, where there have been 208 deaths, including an additional seven Sunday, compared with 155 one week ago. The cases’ daily increase was 641.

The premier of Victoria announced a “state of disaster” and even stricter lockdown measures, a nightly curfew and virtually all trips outdoors banned. The region announced 671 new infections in a single day for a total of 11,557 and 123 deaths, a rise of seven.

“I’ve had the job of leading this state for almost six years — more than 2,000 days. And today is by far the hardest day — and the hardest decision,” Daniel Andrews said in a statement.

“Where you slept last night is where you’ll need to stay for the next six weeks.”

New Zealand, also in Oceania, has 22 deaths with the last fatality on May 28.

South Africa reported the sixth-most most additional cases in the world, 8,195, behind India, United States, Brazil, Colombia and Mexico.