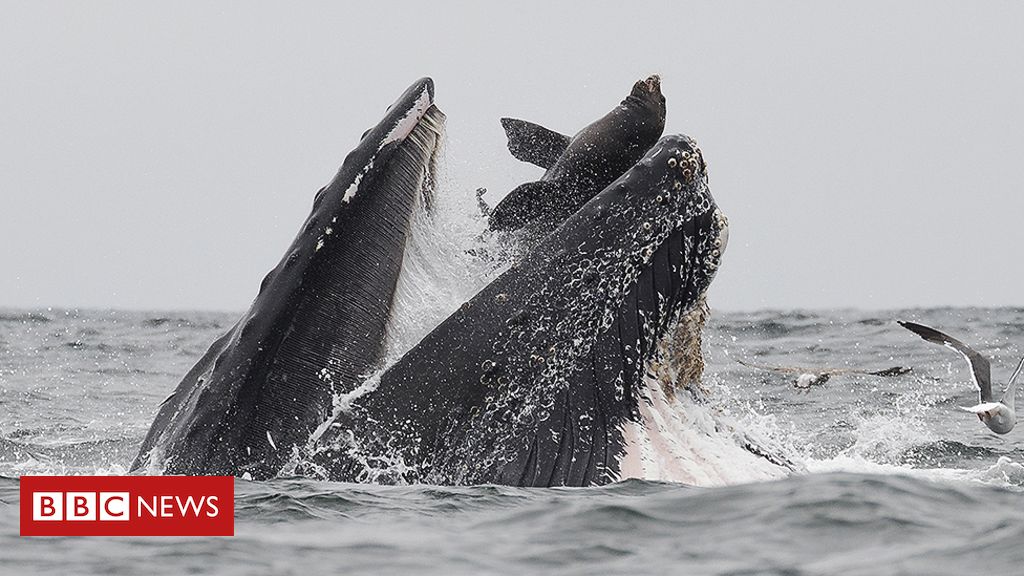 Chase Dekker believes the photo he took of a humpback whale “swallowing” a sea lion is the first time that happening has ever been caught on camera.

The 27-year-old wildlife photographer and marine biologist had taken a boat of whale watchers out on the water in Monterey Bay, California, on 22 July when the incident happened.

The animals were feeding on a school of anchovies at the water’s surface when the whale ended up with something a little larger in its mouth than it probably expected.

“We were watching them feed for a long time and then eventually the event – as I call it the once-in-a-lifetime event – happened, and I still can’t believe it,” he says.

“I had about a split second while the whale was coming up to really comprehend that the sea lion was on top of the whale before shooting the rest of the sequence.”

Chase is “more than 100% confident” the sea lion swam away just fine after it ended up in the whale’s mouth.

Humpback whales don’t have teeth, only baleen plates with bristles inside their mouths. They are filter feeders and the bristles filter food from water – and things like sea lions that don’t belong in there.

A whale will usually take less than five seconds lunge-feeding, Chase says, but in this instance sunk slowly over 15 seconds with its mouth open, giving the sea lion ample time to swim away.

“The whale never actually closed its jaws around the sea lion, so it shouldn’t have been harmed. Very scared, I’m sure, but not harmed.”

Chase says that predators in the sea – such as whales, sea lions, dolphins and sharks – have evolved to hunt the same school of fish together. So he believes ending up inside a whale’s mouth is a rare experience for any underwater hunter. It’s just tiny fish that need to worry.

When Newsbeat spoke to Chase, he was on his way to Tonga to take a group of nature lovers swimming with humpback whales – but he says there’s no risk of any people ending up getting swallowed on this trip.

“We swim with the humpbacks but it’s a breeding ground so they’re not there to feed,” he says.

“Pretty much they almost never even open their mouth, while they’re there.”

The swimmers won’t need to worry about whales connecting with them from underneath – but they should keep their eyes on what’s going on above them.

“Last year we had a few encounters where the whales did almost breach on us. That’s where they leap all the way out of the water, so we’d be in the water and they’d breach really close, which was also just as scary.

“But I’ve never come close to having a Jonah experience myself.”