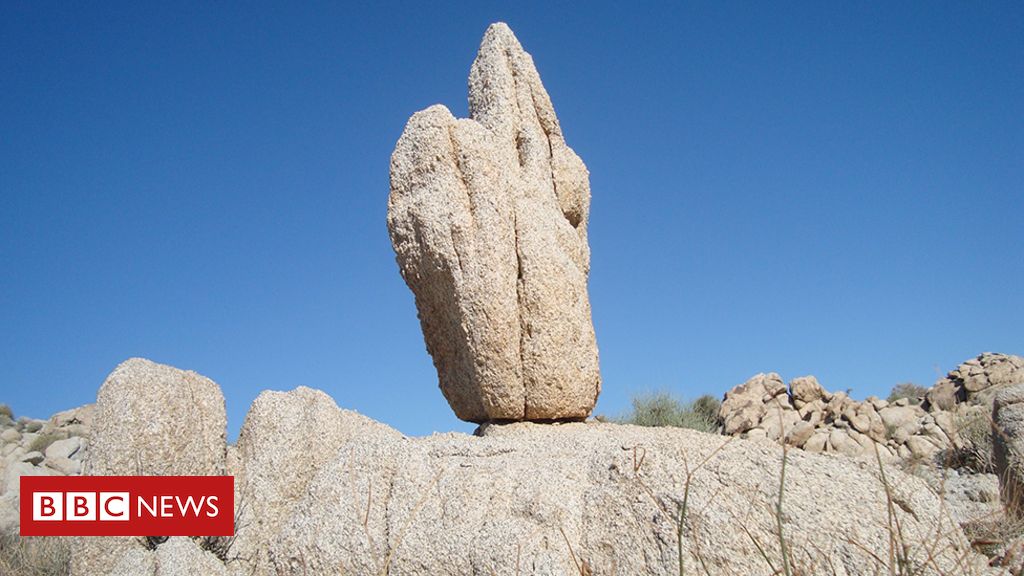 We’ve all seen them; we’ve even taken pictures of ourselves pretending to hold them up or to push them over.

These are the precariously balanced rocks on a hill or a coastal cliff. It’s as if the gentlest nudge would send them tumbling.

In truth, the disturbance needed to unsettle the blocks is quite significant, and that got husband and wife geologists Drs Dylan and Anna Rood wondering about how these great stones could be used to decipher earthquake history.

Think about it: if a precariously balanced rock has held its position for 10,000 years without tipping over, it means the land around the stone hasn’t experienced shaking above a certain level in all that time.

“The turn of phrase we’re trying to coin is that these precariously balanced rocks, or PBRs, are an ‘inverse seismometer’,” explains Anna.

“A normal seismometer records an event that has happened, whereas our PBR is still standing there, and so it records an earthquake that hasn’t happened. Specifically, a large earthquake,” the Imperial College London, UK, researcher tells BBC News.

This is really useful information if you want to build a nuclear power station or waste repository; or maybe a major dam or bridge.

Knowing how robust that structure needs to be requires an understanding of the seismic hazards that could reasonably be foreseen during its lifetime.

Can it expect a certain threshold of shaking once every 100 years, or every 1,000 years, or indeed only once every 10,000 years? The answer will bear directly on the cost of a safe construction as well as the insurance risk.

Planners may be fortunate in that the location where they want to put up that new power station already has a detailed, instrumented record of seismic behaviour. But there will be places where that record is sparse – places where it’s known large tremors can occur but where the history of the size and frequency of events is extremely patchy.

For these sites, geologists will normally conduct what’s called a probabilistic seismic hazard analysis in which they’ll try to model the possibilities, taking account of all the potential local sources of earthquakes, such as nearby fault lines.

What Dylan and Anna have now shown is that any precariously balanced rocks in the vicinity can be used to constrain those models by excluding the most far-out-there possibilities.

As proof of principle they studied PBRs near the Diablo Canyon Nuclear Power Plant in coastal Central California.

These are tall chert blocks that have eroded free of the surrounding rock platform and as a consequence could fall over given the right amount of shaking. But precisely how much shaking would be needed, and how long the blocks have been in this free-standing state are the two unknowns the team had to solve to use the PBRs as inverse seismometers.

The amount of shaking is worked out by taking lots of photos of the PBRs and making a 3D model. Various equations will then elicit the strength of the ground accelerations required to topple the rock.

Working out the second part – the “age of fragility” – relies on a smart technique that tracks changes induced in the rocks as they’ve been exposed to energetic space particles through time.

Cosmic rays when they hit the oxygen atoms in chert’s quartz minerals will generate the radioactive element beryllium-10. Counting the amount of Be-10 in the blocks’ surfaces therefore gives an estimate for how long the stones have been in their precarious situation.

The results of the PBR investigation for the Diablo Canyon Nuclear Power Plant should be reassuring, says Anna.

“We all know we’re on shaky ground in California, but our results show that it’s not as shaky as we had feared.

“Importantly, we’ve made the earthquake shaking estimates twice as certain. We’ve shown that an earthquake with shaking strong enough to topple our precariously balanced rocks – and that would most likely crack the ground and buildings’ walls – has not been recorded by our inverse seismometers over the past approximately 21,000 years.”

The reason this type of assessment is so useful in the specific case of Diablo Canyon is that the main quake “threat” comes from the so-called Hosgri Fault, which is located some 6km offshore, under water.

“So there are a lot of these sites of interest of critical infrastructure that are located on or near the coast, because of the cooling water needs, and where the hazards are offshore – as evidenced by the Fukushima nuclear plant and the Tohoku earthquake of 2011,” says Dylan.

“And unlike [land faults] where you can just go dig trenches and reconstruct the magnitude-frequency relationship and the amount of slip per time, etc – that’s incredibly hard to do with these offshore faults. That’s where PBRs can deliver for us.”

But how available are they? Can you find sufficient numbers of them to make inverse seismometers a widely applicable technique?

There’s a suite of rock types where such features can form, says Anna. “The vertical joints set is all you need. And, once you know what you’re looking for and get your eye in – they are actually much more ubiquitous than you might think.”

Drs Dylan and Anna Rood, and colleagues, report their PBR work in the journal AGU Advances.