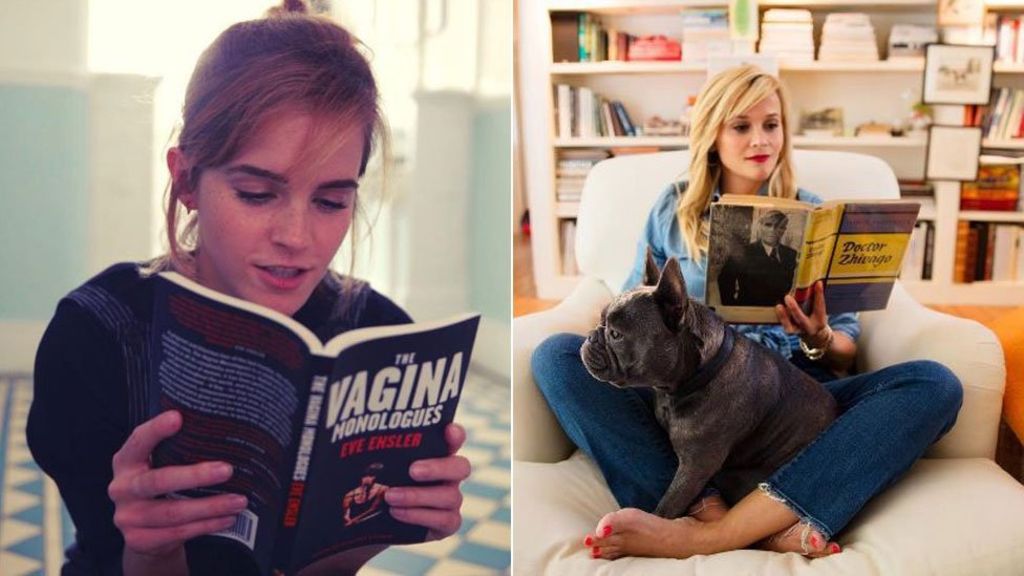 Celebrity book clubs are becoming increasingly popular, but is this a great thing for reading or just another vanity exercise?

Old hands at the book club game are husband and wife team Richard Madeley and Judy Finnigan and Oprah. Their clubs began on TV but the new breed has, from the off, been virtual – online and on apps.

And the main players are almost exclusively female, including Emma Watson, Reese Witherspoon, Florence Welch, Zoella and Sarah Jessica Parker, as are the clubs’ members.

It would be easy to be cynical about this new trend but it has its merits, says Claire Armitstead, associate editor for culture at the Guardian.

“These celebrities want to show they are intelligent people and not just celebrities, that’s perhaps their motive for it.

“But what they bring is their brand. There are so many books in the world that any kind of ‘sorting hat’, to use a Harry Potter term, is a good thing for reading.”

Debut writer Caz Frear knows the benefit of star endorsement. This week she sees her first novel, crime thriller Sweet Little Lies, hit the shelves after winning Richard and Judy’s second Search for a Bestseller competition. She says it was the couple’s name that encouraged her to enter.

“It was the possibility of their validation, they are huge names in the literary world. You think, if they like it then I must have something. There were other competitions that weren’t small fry but I wanted to put myself in the strongest position.”

The Richard and Judy club has grown into a polished brand in collaboration with high-street chain WH Smith since starting on the couple’s Channel 4 chat show in the early 2000s.

Now only online (and in stores), it is more successful, says Madeley. “I knew it would be fine, we are a brand and, in fact, we’re selling more books than before… the internet is king.

Books are submitted for consideration by publishers, which inevitably leads to recurring well-known names. But the final selections – issued three times a year – are made on quality alone, says Madelely.

“We choose a lot of established names, yes, but it’s entirely on merit. We love finding new talent like Caz… you need fresh blood all the time… books are the stuff of life.”

If he and Finnigan keep an eye on the new celebrity clubs, it’s from an interested, not competitive, stance. “We’re all out there to get people reading,” says Madeley.

A recent survey by The Reading Agency showed two thirds of people would like to read more but are too busy.

Yet, the agency’s chief executive supports Armitstead’s “sorting hat” theory: “Most people also said they struggled to find a book they liked. Recommendations are the most likely thing to convince people to read more literature… however they are signposted to books, it can only be a good thing,” says Sue Wilkinson.

Harry Potter star Emma Watson points her followers towards powerful feminist literature through her club Our Shared Shelf (OSS) on the Good Reads website. She is also active on Instagram.

Watson launched OSS in 2016 following her appointment as UN Women Goodwill Ambassador and her HeForShe speech.

Every two months she selects a book for her 193,000-plus members to absorb and discuss.

Selections have included Gloria Steinem’s My Life on the Road and Margaret Atwood’s The Handmaid’s Tale – now enjoying renewed interest possibly due to a heady combination of a Channel 4 dramatisation, Watson’s endorsement and the topicality of its issues.

Watson’s enterprise is clearly serious and she’s left books for others to find on the London and New York undergrounds.

“Emma Watson with her feminist classics is placing herself as a young thinking woman but doing it through her position as a UN ambassador is quite structured,” says Armitstead. “Similarly, if someone wants to project themselves as a fun person they are going to choose fun books.

“Emma Watson will have people advising her, probably in order to push the kind of books the organisation thinks people should be reading.

“It is a good thing for a woman to read Gloria Steinem but has Emma Watson?”

Relaxed and seemingly without agenda is Florence Welch’s Between Two Books on Twitter. Her fan website also promotes the club.

It was established by Welch enthusiasts in dedication of her love of reading, demonstrated in her regular online posts about books. She got involved at their invitation.

Welch suggests a wide range of literature, from Eimear McBride’s The Lesser Bohemian to the poetry of Ted Hughes. She also involves her music mates, so that Nick Cave and Bat for Lashes have flagged up choices.

Welch dips in and out of the 11,000-plus members’ discussions and even offers the chance to meet her, authors and each other at book events such as the Borris Festival.

Unlike some other clubs which are more inclined towards just showcasing the star’s reading, Watson and Welch’s are clubs in the traditional sense. They allow like-minded people “to get together” (literally in Welch’s case) and talk.

And the fans love it.

“The club (Between Two Books) is for fans and managed by fans, ordinary, lovely and like-minded people,” says one ardent fan, Kawanna Pena Cepeda, from the Dominican Republic.

“It makes it more approachable and grounded. It doesn’t have any ‘agenda’… other than share amazing literature that our queen, Florence, loves.

“It’s an amazing way to connect with other Flo fans other than by her music. It’s exciting to think the book you are currently reading, Florence is reading as well… it feels like we are connected.”

“To have that instant connection (however small) feels really good. Then, I put some serious thought into what she’s trying to do… open up a discussion on women’s issues… it’s a complex topic to tackle because it is a very human issue.”

Authors and the book industry are also reaping benefits from this endorsement.

And a true powerhouse in driving author interest, and sales is Reese Witherspoon. The actress has become “a champion of female fiction writers”, says Isabelle Broom, book reviews editor at Heat magazine.

‘Uptick in my Amazon ranking’

Her book club is on Instagram, with 71,000-plus followers. She also talks books on Twitter. And, she has an eye for a story which is prime for movie adaptation and is quick to buy the rights through her production company, such as Gillian Flynn’s Gone Girl.

Broom describes the actress as a “positive force of good” and authors are effusive too, among them Jessica Knoll, writer of Luckiest Girl Alive.

“[Witherspoon’s] support has immensely boosted Luckiest Girl Alive’s visibility and sales,” says Knoll. “It was featured in a lot of traditional media and that definitely had a cumulative impact, but when Reese featured my book… I noticed an immediate and enormous uptick in my Amazon ranking.

The Zoella Book Club, also supported by WH Smith and just relaunched for 2017, has also had industry impact – and on teenage girls.

Author Alex Bell’s Frozen Charlotte was chosen for Zoella’s 2016 crop of reads and she says “it meant the book was able to reach a much wider audience than it would otherwise”.

“Zoella’s book club is particularly worthwhile because it helps get teenagers excited about books and reading for pleasure, which is a wonderful thing,” she adds.

Zoella and the other female star book-clubbers demonstrate the trend for reading groups in the real world to be mostly (90%) made up of women, according to Sue Wilkinson at the Reading Agency.

Heat’s Isabelle Broom suggests this is because “women like to feel part of something, and lots of us like to feel validated, too… Plus, us girls LOVE to chat”.

But, while the reason needs further investigation, says Wilkinson, what is clear is that “real” book clubs – in libraries, homes and pubs – are still a big deal, and the agency has more than 4,000 in its reading groups network.

And what of the future of the virtual celebrity club?

“They have a shelf-life and people like Emma Watson will get bored and start looking for the next new thing,” says Claire Armitstead.

“But someone else will come along. There’s no end of people who want to hitch their wagon to the star of reading.”