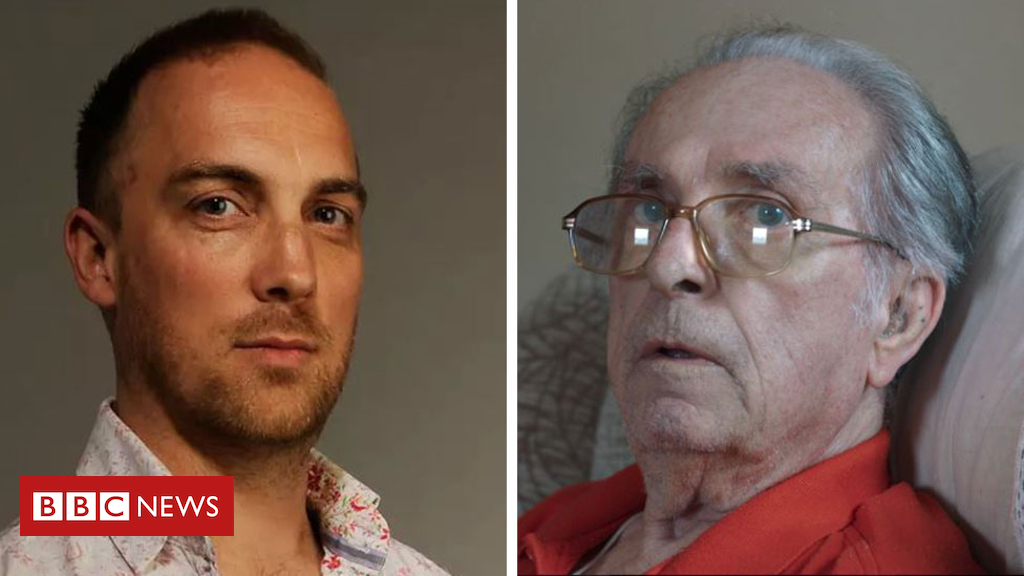 The old man lies in the hospital bed, drawing his last, rattling breath as he fades away from life.

The film camera, positioned just next to him, keeps rolling. We see the nurses move him to another room before they gently clean his body.

“Nobody wants to die but it’s a natural thing, we are biologically determined to die,” says documentary maker Steven Eastwood.

“Death is seen as a shameful thing – we think we’re a progressive society, but we repress and deny death,” Steven says.

“We’re no better than the Victorians.”

He was a quiet onlooker during the last year of his subjects’ lives, filming them in their homes before they became part of the daily rhythms of life in a hospice.

“To say you don’t want it to happen, you’re putting off facing something,” he says.

“We need better death awareness to be more familiar with our mortality. I don’t think that’s ghoulish.”

The documentary came about after Fabrica, a gallery in Brighton, commissioned a film about end of life.

The London-based film-maker’s proposal was accepted, and he managed to get access to film in a hospice on the Isle of Wight.

He speaks fondly of his time there, saying: “These are four people I really cared about – Alan, Roy, Mary and Jamie; three were in their 80s and one was in his 40s.”

Steven regularly made the five-hour journey to the hospice, including the boat trip to the island, which features in the slow, often hypnotic imagery of the documentary and its trailer.

He made the film after having “two quite significant bereavements – my mother-in-law and my best friend, who was the same age as me.

“So I realised I didn’t know very much about what palliative care is.”

Steven thinks we need to face the reality of death, make it part of our daily existence, so it’s less frightening.

“I think we all have an existential fear – ‘if I see someone I love who’s died, it’ll be too traumatic, it’ll replace all the images I have of them, I’ll never be able to unsee it, somehow it’ll hurt me’.

“But for me it isn’t the case, being with someone after dying, with that intimacy. I found it quite empowering and peaceful.”

He has huge admiration for the people who work in hospices, and hopes his film can “celebrate and show what palliative care is”.

“The most radical, extraordinary people in our society are the least visible,” he says.

“They’re the carers. And the care we receive at the end of our lives is extraordinary.

“These hospices which people have anxiety about going into – they’re not morbid, sterile spaces, they’re places of life.”

He says that after one of the screenings of Island, a stranger approached him, saying it had made him “less afraid of dying”.

Steven adds: “It’s not an ambition of mine, but if you can sit through the film and at the end feel uplifted, if you can make some kind of peace with something that will happen to all of us, then that’s a good thing.”

He speaks fondly about all his subjects, talking at length about Alan, whose death we see at the start of the film. Alan died of cancer.

‘He was living to smoke’

“Alan had chain-smoked since he was 16 and he smoked in the hospice with a nurse lighting his cigarette. But he wasn’t dying of a smoking-related cancer.

“This is part of what palliative care is – helping someone smoke until they die.

“The doctors felt that if he hadn’t been smoking he would have died several weeks earlier – he was living to smoke.”

Alan invited him to film his last moments.

“The second time I met Alan, we had a connection, he said, ‘I think you’d like to stay with me all the way through and I think that would be great’.

“He wanted to do something radical with his death, he felt quite radical about his life.

“He believed our tissue is just a vehicle and we translate into something else.

“As far as he was concerned, there was no self-consciousness around his image, he thought participating was a way of marking something of his philosophy. He became my movie star, he was like my Burt Lancaster.”

‘Bliss in his eyes as he died’

“His death was a long, running out of breaths. It was very peaceful and very beautiful and I felt really moved by it. I didn’t feel sad. He was really ready to die.”

Alan told Steven he had seen a man die when he was just 19, during active service in the forces in North Africa. His commanding officer was shot, and died in his arms.

“He held this man and said, ‘I saw bliss in his eyes as he died, and I knew that what we are experiencing now is not it, there’s more’.

“So for him, his death was the thing he’d been waiting for. We can’t all ask for that.”

Steven acknowledges that of course deaths can be sudden or premature, such as Jamie’s.

“Jamie had stage 4 stomach cancer and had a young family, his attachment to his daughter was so incredible.

“He wanted to die in the best way he could with his daughter, so he involved her in everything, talked about his treatment, about what it was going to be like when he’s not there.

“He’s the person who I get upset thinking about.”

The film has been used to help medics in handling end of life care, and Steven and his producer are partnered with Sussex NHS trust.

“We’ve run two sessions with trainee doctors, to use the film as a means to talk about how we speak around death and dying, and how we talk to patients.”

He’s also keen to attract a young audience as he says people in their 20s are the “biggest death deniers”.

Steven talks about the pressure to be “productive, youthful, to look good”.

“This idea that we’re terminal and have an end is too much. I’ve spoken to young people who think about their late life and say, ‘oh I just want to take a pill to end it, when I’m no longer viable I switch myself off’.

“I do think it’s challenging to confront your own mortality.”

Steven, who also volunteers at his local hospice, thinks other cultures handle death better than we do, saying in Ireland “you see a more sustained grieving process and more familiarity being around the body”.

He also talks about Latin America and Asia, where they have “a completely different attitude towards the dying process”.

“I think we need better education – we are finite, our bodies do decay, and I’ve made my peace with that.

“I hope the film can return us to some extent to our biological bodies, and say yes, everybody will die, most people will die in this way, in their 70s or 80s from either heart disease or cancer, and the care will be extraordinary.

“I don’t find that a burdensome thought. I felt poorly informed, and now I feel better informed by making the film – I hope that it will do that for people.

“We die and we don’t have to turn it into some kind of sanctum, it’s life. And I think Alan showed me that, so yeah, I was very, very fortunate to be invited to film him.”

Island is released in UK cinemas on Friday 14 September.