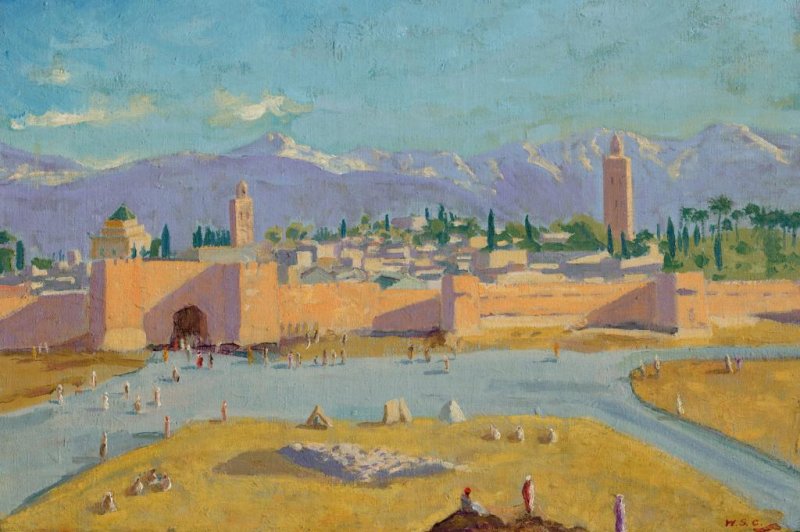 The artwork, Tower of the Koutoubia Mosque, completed in 1943, fetched some four times its auction estimate of between $ 2.1 million and $ 3.5 million, Christie’s London said. The landscape is of Marrakesh, Morocco, a favorite subject of Churchill’s.

The previous record for a Churchill painting was set in 2014, when a painting of a pond — The Goldfish Pool at Chartwell, sold for $ 2.82 million as part of a Sotheby’s auction. It was part of a sale of personal possessions owned by Mary Soames, the last-surviving daughter of Churchill who died earlier that year.

Churchill gifted the Mosque painting to former U.S. President Franklin D. Roosevelt, who later passed it to his son, Elliot Roosevelt. It eventually made its way into the possession of the Jolie Family Collection in 2011. It was most recently on exhibit at the Mildred Lane Kemper Art Museum at Washington University in St. Louis as part of a show entitled “The Paintings of Sir Winston Churchill” in 2015-16.

“The auction of Modern British Art demonstrated the vibrant and dynamic nature of this market with exceptional provenance as witnessed in the Churchills, Lavery, the Collection of Mireille and James Lévy and the Estates of L.S. Lowry and Carol Ann Lowry,” said Nick Orchard, the head of Christie’s Modern British Art Department. “These works generated international interest with competitive bidding throughout the evening, resulting in Christie’s second highest total for a Modern British Art evening sale.”