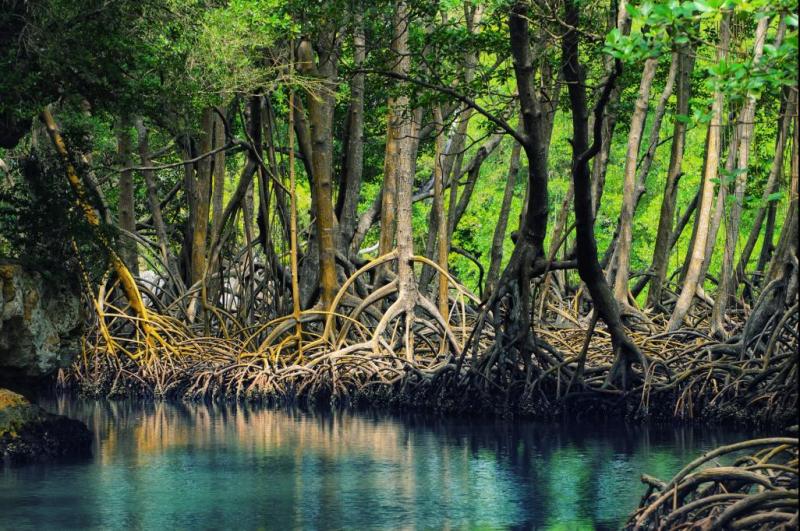 June 4 (UPI) — Mangroves provide hundreds of millions of dollars in protections against coastal storms and flooding every year, but they could soon be gone if carbon emissions aren’t significantly curbed in the coming decades.

For the new study, published online Thursday in the journal Science, researchers analyzed sediment layers from the end of Earth’s last deglaciation period, 10,000 years ago. Based on the analysis, scientists ran simulations to estimate the effects of sea level rise on mangroves under two scenarios, low and high carbon emissions.

The models showed that under a high carbon scenario, featuring 6 millimeters of sea level rise per year, mangroves would be highly unlikely to grow fast enough to keep up with rising seas. Simulations predicted the demise of mangroves with 90 percent certainty.

When sea levels rose less than 5 millimeters per year, mangroves were able to increase their vertical growth to survive rising seas.

“We know that sea level rise is inevitable due to climate change, but not much is known about how different rates of sea level rise affect the growth of mangroves, which is an important ecosystem for the health of the Earth,” lead study author Neil Saintilan, professor of earth and environmental sciences at Macquarie University in Australia, said in a news release.

In addition to protecting coastal infrastructure from waves and flooding, threats that will be exacerbated by sea level rise, mangroves provide vital habitat for a diversity of marine species. If carbon emissions keep pace, those habitats are unlikely to persist past the middle of this century.

“In 30 years, if we continue on a high-emissions trajectory, essentially all mangroves, including those in Singapore, will face a high risk of loss,” said study co-author Benjamin Horton, professor of environmental sciences at NTU Singapore. “This research therefore highlights yet another compelling reason why countries must take urgent action to reduce carbon emissions. Mangroves are amongst the most valuable of natural ecosystems, supporting coastal fisheries and biodiversity, while protecting shorelines from wave and storm attack across the tropics.”

Mangroves don’t just provide shelter to animals and quell storm waves. They also store carbon. Scientists tracked the proliferation of mangroves at the end of the last deglaciation period by measuring the draw down of carbon concentrations in ancient coastal sediment layers.

Researchers estimate mangroves will be forced to move inland if they can’t grow vertically fast enough to outrace sea level rise. As they encroach on the shore, mangroves will have to compete with land plants, a competition they are unlikely to win.

“Most of what we know about the response of mangroves to rising sea level comes from observations over the past several years to decades when rates of rise are slower than projected for later this century,” said study co-author Nicole Khan, assistant professor of earth sciences at the University of Hong Kong. “This research offers new insights because we looked deeper into the past when rates of sea level rise were rapid, reaching those projected under high emissions scenarios.”

“Our results underscore the importance of reducing emissions and adopting coastal management and adaptation measures that allow mangroves to naturally expand into low-lying coastal areas to protect these valuable ecosystems,” Khan said.