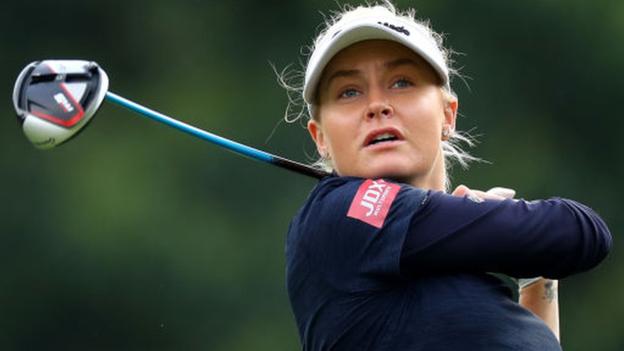 England’s Charley Hull started strongly at the Women’s British Open at Woburn in her bid to win a first major.

Hull, 23, shot a five-under-par 67 on her home course – including a birdie at the 18th – and is two shots adrift of leader Ashleigh Buhai of South Africa.

Hinako Shibuno of Japan and American Danielle Kang are one stroke behind Buhai, with South Korean world number one Ko Jin-young on four under par.

The 2018 champion Georgia Hall began her title defence with a bogey-free 69.

“I’m happy and I played really well – I walked on that tee and it took me back to last year and I’m excited to be playing at home and have that support around me,” said England’s Hall, who finished two shots clear of the field at Royal Lytham and St Annes last year to win her first major.

Hull said: “I’m not expecting too much, just going out there and having fun.

“I trusted myself and feel I’m in a good mindset this week.”

Britain’s top-ranked player Bronte Law, 24, finished her opening round on two under par.

Fellow Englishwoman Laura Davies had a first round to forget – the 55-year-old four-time major winner carded a 10-over-par 82 and is highly unlikely to make the cut.