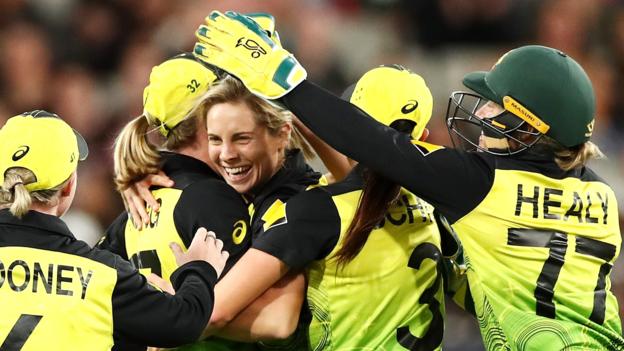 It was a near-perfect evening for the hosts, who posted 184-4 after a brutal 75 from Alyssa Healy and opener Beth Mooney’s unbeaten 78.

An overawed India slid to 18-3, with teenage star Shafali Verma falling to the third ball of the chase, and they were never in the game.

Megan Schutt again shone, taking 4-18 as India were bundled out for just 99 with five balls left.

This will be remembered as one of the most emphatic performances in a final by any side.

The 86,174-strong crowd fell just short of breaking the record attendance at a women’s sporting event – which stands at 90,185 – but it was an astonishing, atmospheric evening.

Australia were as ruthless as they have ever been to steamroller India, whose heads seemed to drop midway through the first over of the match when Healy was dropped by Verma.

It means Australia’s dominance of women’s cricket continues – and India, once again, fell short at a global final.