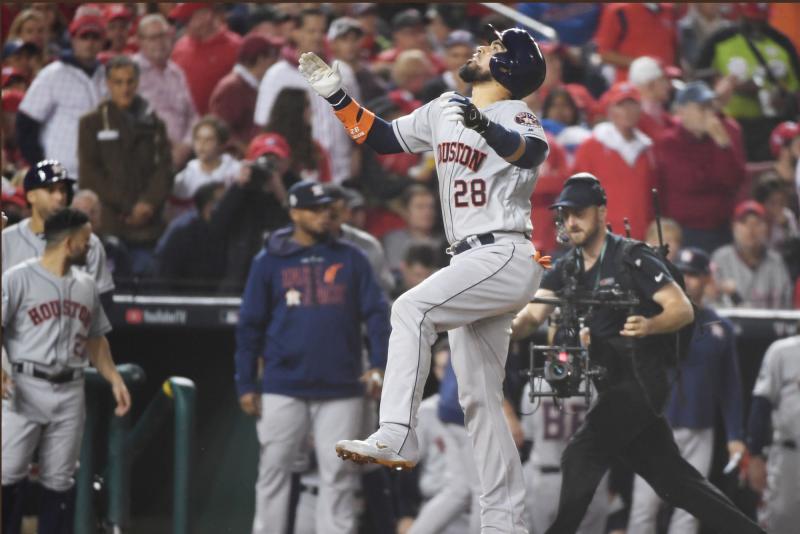 Oct. 26 (UPI) — The Houston Astros climbed back into the World Series with a 4-1 win over the Washington Nationals on Friday night at Nationals Park to cut their deficit to 2-1 in the best-of-seven series.

Astros star Jose Altuve doubled twice and scored each time and starter Zack Greinke worked out of multiple jams to help Houston end the Nationals’ eight-game winning streak, which was tied for the longest in a single postseason.

Greinke, the 2009 AL Cy Young Award winner, threw only 4 2/3 innings and gave up seven hits and three walks, but managed to allow only one earned run. The Astros sent out five relievers after Greinke’s departure, with the bullpen allowing only two hits in 4 1/3 scoreless innings.

Josh Reddick delivered an RBI single in the second inning to push the Astros in front. Michael Brantley plated Altuve with a sharp grounder up the middle that bounced off Nationals starter Anibal Sanchez‘s glove to give the Astros a 2-0 lead.

Nationals center fielder Victor Robles answered with an RBI triple down the left-field line in the fourth, cutting Washington’s deficit to 3-1.

Brantley singled to right field and scored Altuve again in the fifth, and Robinson Chirinos belted a solo home run in the sixth to clinch a key victory in the series for the Astros.

The wild-card Nationals were unable to produce in clutch moments, going 0-for-10 with runners in scoring position and leaving 12 runners on base.

Sanchez, who took a no-hitter into the eighth inning of his last start, allowed four earned runs on 10 hits across 5 1/3 innings against the Astros. He struck out four and walked one.

Game 4 of the series is scheduled for Saturday night at Nationals Park. Washington is expected to start Patrick Corbin, while Astros manager A.J. Hinch said he will send out rookie Jose Urquidy.