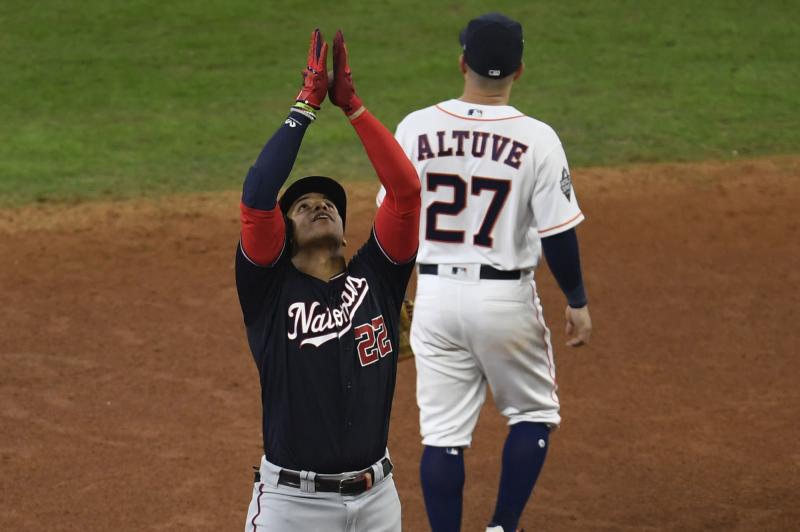 Oct. 22 (UPI) — Juan Soto came up clutch with three RBIs as the wild-card Washington Nationals earned a 5-4 upset win over the Houston Astros on Tuesday at Minute Maid Park to take a 1-0 lead in the World Series opener.

Soto finished with three hits and a stolen base against the Astros. Ryan Zimmerman also homered to back Nationals starter Max Scherzer to the win.

The Astros jumped out to a 2-0 lead in the first inning after Yuli Gurriel doubled to deep left. Jose Altuve and George Springer each scored, putting Scherzer in an early hole.

Zimmerman belted a solo homer in the second and Soto smashed an opposite-field shot onto the train tracks high above the wall in left field during the fourth to tie the score at two runs apiece.

Astros outfielder George Springer sparked a comeback with a solo home run to center in the seventh inning. In the eighth, he came through again with an RBI double to cut Houston’s deficit to 5-4.

Nationals closer Sean Doolittle pitched 1 1/3 innings to earn the save, giving Washington a surprising Game 1 victory on the road.

Cole gave up five earned runs on eight hits across seven innings. He recorded six strikeouts and walked one.

Game 2 of the best-of-seven series is scheduled for Wednesday night in Houston.