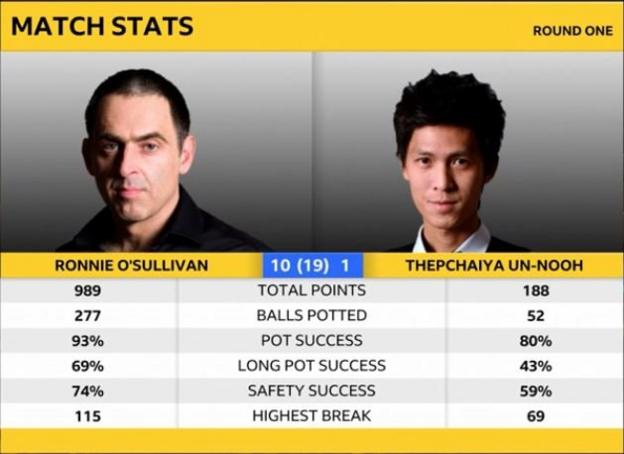 O’Sullivan was at his destructive best in Sunday’s first session with two centuries and five further breaks of 60 or more to open an 8-1 lead.

And the Englishman took less than half an hour on Monday morning to win the two frames needed to end the match.

O’Sullivan will face China’s Ding Junhui in the second round.

The victory smashed the previous record for the quickest match by 41 minutes, set last year by Shaun Murphy in his 10-0 whitewash of Luo Honghao.

O’Sullivan told BBC Sport: “I prefer it (without crowds).

“I do not have to deal with the pressure and expectation of the crowd, getting in and out of the venue, and so much less is put on my shoulders.

“It feels like a holiday buzz and I can stay in a hotel close to the venue. Previously it has been difficult for me to get any peace and quiet.

“I am very private, and I don’t socialise much. Everybody is welcome to my world now, it suits my life.”

O’Sullivan had spoken before the tournament about players being treated like “lab rats” by allowing a limited number of spectators into the Crucible Theatre, Sheffield on the opening day, but changes in government guidelines meant none were permitted to attend thereafter.

‘The Rocket’ seemed like he was revelling in the silence and lack of distractions inside the auditorium and heavily punished any error made by Un-Nooh.

O’Sullivan suffered a shock first-round defeat by amateur James Cahill last year but this win sets up a tantalising tie against China’s Ding, which starts on Friday.