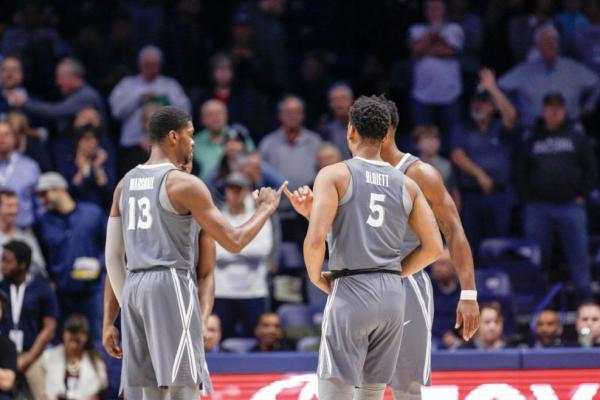 CINCINNATI — Ninth-ranked Xavier’s victory over Marshall never was in serious doubt Tuesday night. Its biggest concern now is getting healthy before Friday’s game at Northern Iowa.

Kerem Kanter scored 16 points and had a career-high 13 rebounds, and Tyrique Jones added 14 points and 11 boards to help Xavier overcame several key injuries to defeat Marshall 81-77 at the Cintas Center.

“We’re light on scholarship players right now,” Xavier coach Chris Mack said. “I’m proud of my team. I was super-charged about our team not making excuses.”

Kanter had his second double-double of the season while playing a career-high 35 minutes. Sean O’Mara and Quentin Goodin each scored 14 points, helping Xavier (11-1) win its sixth straight game.

The front-line trio of Kanter, Jones, and O’Mara combined for 44 points and 29 rebounds as Xavier dominated Marshall inside.

“I wish I was a better coach to find a way to play all three at the same time,” Mack said. “Offense is one thing, defense is another matter, but they played great.”

Jones also was hobbled by a knee injury and freshman Naji Marshall did not play in the second half because of an apparent back injury after scoring seven points before halftime.

“What the hell do you want me to do?” Mack said when asked about the slew of injuries. “I’m just glad the medical guys gave me some guys to play with.”

C.J. Burks scored 14 of his 18 points in the second half to help Marshall rally to make it close at the end. Ajdin Penava led the Thundering Herd (8-4) with 25 points and Jon Elmore added 16.

“There are no moral victories,” Marshall coach Dan D’Antoni said. “We were jittery in the beginning. We didn’t handle the No. 9 (ranking) in front of their name. It took us some time to adjust.”

With Macura out, it figured to be a big night for Naji Marshall, who scored five points in the first five minutes, including a 3-pointer to give Xavier an early 12-5 lead.

Xavier frustrated Marshall in the first half by keeping them mired in half-court offense. The Musketeers’ 1-3-1 zone flustered the Thundering Herd, who went 3 of 18 from 3-point range and shot 30 percent in the half.

Xavier led 47-27 at halftime behind 12 points from O’Mara and 10 each from Jones and Trevon Bluiett. The Musketeers outscored the Thundering Herd 24-12 in the paint but had to hang on for the win in the second half.

“We had some odd matchups in there with the guys we had,” O’Mara said. “I’m glad we fought through it. I think our guys played really hard tonight.”

Elmore, who came in averaging 24.2 points and 7.5 assists, had eight points and two assists in the first half.

It certainly wasn’t pretty, but Xavier preferred a slugfest, particularly with Marshall wanting to push the pace.

“We came out with a ton of energy. I thought our zone was terrific,” Mack said. “The second half, a lid goes on the basket.”

Xavier shot only 29.2 percent in the second half, allowing Marshall to creep back into the game. Elmore hit a 3-pointer at the buzzer to make the final score seem closer than it was.

Marshall held Bluiett, Xavier’s leading scorer, to 10 points on 4-of-13 shooting. The Musketeers were 23 of 26 from the free-throw line, helping them close out the win.

“For us, it’s a win,” Mack said. “To be able to say your best player (Bluiett) isn’t going to play very well, two guys that don’t play one minute, and then the guy who fills in for them doesn’t play in the second half. Not sure how many teams can battle through that.”

NOTES: Marshall scored a season-low 27 points in the first half. … Xavier graduate F Kerem Kanter and freshman G Naji Marshall made their first starts of the season. … The Musketeers have won 39 straight non-conference home games dating to the 2012 season. … Xavier improved to 11-0 when outrebounding its opponent. … Marshall entered the game ranked 10th nationally in scoring offense at 90.2 points.