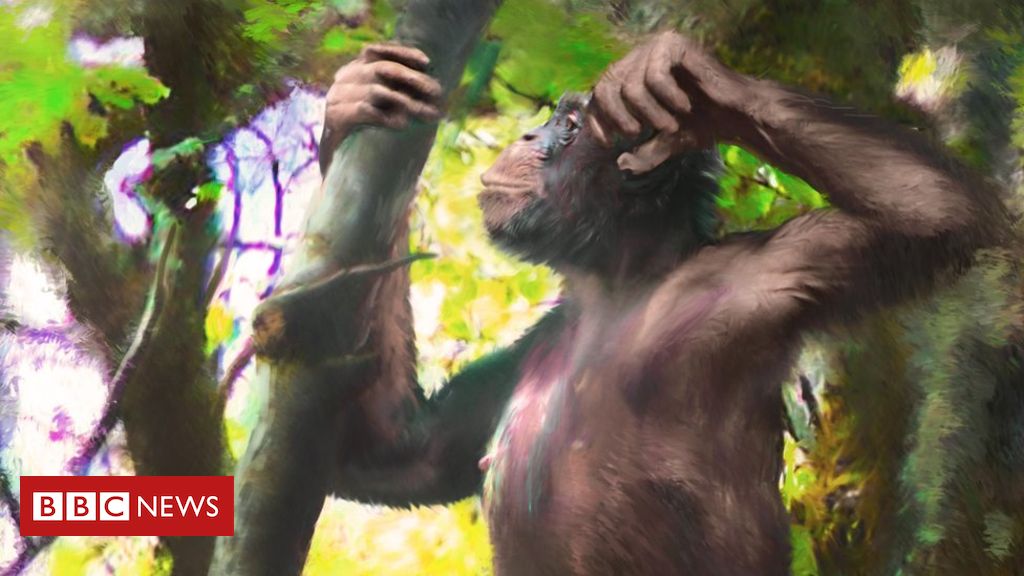 Fossils of a newly-discovered ancient ape could give clues to how and when walking on two legs evolved.

The ability to walk upright is considered a key characteristic of being human.

The ape had arms suited to hanging in the trees, but human-like legs.

It may have walked along branches and even on the ground some 12 million years ago, pushing back the timeline for bipedal walking, say researchers.

Until now the earliest fossil evidence for walking upright dates back to six million years ago.

The four fossils – of a male, two females and a juvenile – were unearthed in a clay pit in Bavaria between 2015 and 2018.

“The finds in southern Germany are a milestone in palaeoanthropology, because they raise fundamental questions about our previous understanding of the evolution of the great apes and humans,” said Prof Madelaine Böhme from the University of Tübingen, Germany.

She said the ape could be the best model we have for the “missing link” between humans and apes.

What does the discovery tell us about how bipedal walking evolved?

Ever since Charles Darwin’s day, there has been intense debate about how and when our early ancestors began to walk on two legs.

Did this key characteristic of humans arise from an ape, much like the orangutan, that lived in the trees, or from a knuckle-walking ancestor, which spent most of the time on the ground, similar to a gorilla?

The new research, published in the journal Nature, suggests our upright posture may have originated in a common ancestor of humans and great apes who lived in Europe – and not in Africa, as previously thought.

The fossils of Danuvius guggenmosi, which lived 11.62 million years ago, suggest that it was well adapted to both walking upright on two legs as well as using all four limbs while climbing like an ape.

These findings suggest that bipedal walking evolved in the trees over 12 million years ago, the researchers said.

“Danuvius combines the hindlimb-dominated bipedality of humans with the forelimb-dominated climbing typical of living apes,” explained Prof David Begun, a researcher from the University of Toronto.

The male has the most complete skeleton, which resembles that of modern-day bonobos. It was about one metre in height and tipped the scales at about 31 kg. Females weighed about 18 kg, less than any great ape alive today.

Thanks to well-preserved limb bones, vertebra, finger and toe bones, the researchers were able to reconstruct the way the animal moved.

“For the first time, we were able to investigate several functionally important joints, including the elbow, hip, knee and ankle, in a single fossil skeleton of this age,” said Prof Böhme. “It was astonishing for us to realise how similar certain bones are to humans, as opposed to great apes.”

The animal’s build, posture and locomotion are unique among primates. Understanding how we came to walk on two feet promises to answer many of the fundamental questions about the evolution of our species.

Walking upright was a key milestone in human evolution, opening up opportunities to touch, explore, and learn how to carry and use tools.