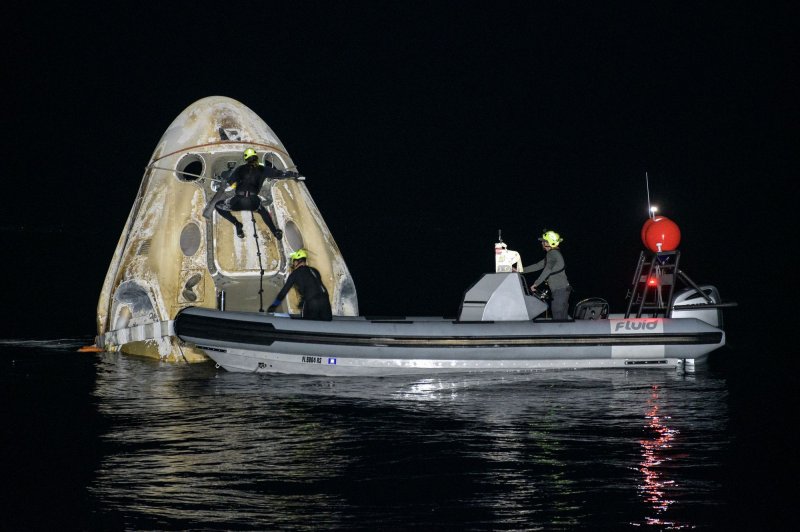 May 2 (UPI) — Astronauts from SpaceX‘s Crew-1 mission splashed down in U.S. waters at 2:57 a.m. Sunday, and crews successfully recovered the capsule and astronauts in the Gulf of Mexico off Panama City, Fla.

The astronauts saw the Crew Dragon capsule Resilience undock from the International Space Station at 8:35 p.m. EDT Saturday and head for the nighttime splashdown off Florida about 6 1/2 hours later.

The astronauts were to fly back to Houston.

“Welcome home Victor, Michael, Shannon, and Soichi, and congratulations to the teams at NASA and SpaceX who worked so hard to ensure their safe and successful splashdown,” said former Sen. Bill Nelson, also a former astronaut confirmed by the Senate to serve as NASA administrator on Thursday. “We’ve accomplished another incredible spaceflight for America and our commercial and international partners. Safe, reliable transportation to the International Space Station is exactly the vision that NASA had when the agency embarked on the commercial crew program.”

The four Astronauts traveled 71,242,199 statute miles during their 168 days in orbit, including 167 days aboard the space station. The crew also broke the American crewed spacecraft mission duration record of 84 days, 1 hour, 15 minutes, set by the final Skylab crew in February 1974.

Shortly before 2 a.m. EDT, the capsule’s thrusters performed a 16-minute burn to slow the spacecraft, removing it from orbit and head the astronauts toward their prime landing area. Clear weather and minimal winds at about 2 knots were called excellent for the splashdown.

At the time if left orbit, the capsule was moving at 16,500 mph, and it eventually slowed to about 16 mph, with the aid of parachutes, when it hit the water.

The splashdown was the first night return of a U.S. crewed capsule since Apollo 8’s predawn landing in the Pacific Ocean on Dec. 27, 1968, with NASA astronauts Frank Borman, Jim Lovell and Bill Anders.

According to NASA, the Crew Dragon undocked autonomously and left the space station, with the capability to splash down at one of seven predetermined landing zones.

The primary sites chosen Friday were in the Gulf of Mexico off Panama City, Fla., followed by near Tampa, Fla.

The astronauts brought with them what the space agency calls “important and time-sensitive research.”

The capsule flew robotically, which was the plan, crew commander Mike Hopkins said in a news conference Monday from the space station.

The Crew-1 mission marked the first time four people flew in a space capsule, and was only the second crewed launch for SpaceX and NASA’s commercial crew program.

The best part of the mission was greeting the Crew-2 astronauts, who arrived on Saturday morning at the space station, Noguchi said at the press conference. That arrival boosted the population of the space station for a short while to 11 for the first time in years.

The Crew-1 mission was launched from Kennedy Space Center in Florida on Nov. 15, before vaccines for the COVID-19 pandemic became available. The crew members intend to be vaccinated in the coming weeks, the astronauts said.