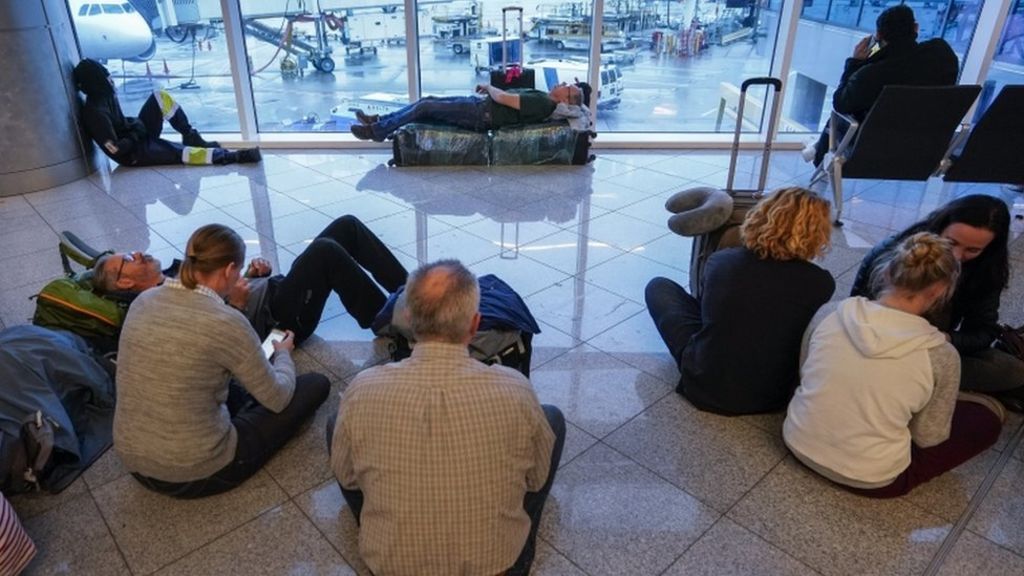 A power cut at Atlanta’s Hartsfield-Jackson international airport on Sunday led to a partial shut-down, affecting tens of thousands of people.

The airport is the world’s busiest, handling more than 250,000 passengers and almost 2,500 flights every day.

Passengers were left in darkened terminals or on board planes.

Power is now restored at the airport, but there have been more than 1,000 flight cancellations, with hundreds more scheduled for Monday.

Many flights scheduled to arrive from other airports were being diverted elsewhere or held at their departure airport.

Georgia Power, which supplies the airport’s electricity, said it believed a fire at an underground electrical facility was to blame for the power cut. Officials said a piece of its switchgear could have failed and started the fire, causing cable damage.

Power was fully restored to the airport late on Sunday.

Atlanta’s mayor confirmed the fire’s cause was under investigation, and apologised to the thousands affected.

A number of major airlines, including United, Southwest and American Airlines, completely suspended their operations on Sunday.

Images shared on social media showed passengers waiting in darkness. Some reported being stuck on board aircraft for six hours.

One passenger, Jannifer Lee, was travelling to Minnesota from Florida with her 10-year-old pet rescue cat Penny.

Her first flight was stuck for almost four hours at the gate.

“I was hoping to have a really smooth flight, especially with a cat,” she told the BBC.

“I’ve only ever flown with her for two or three hours before, not a 12-hour journey! I guess animals can be a lot more resilient than people.”

She and thousands of others were left stranded without information from airlines about onward travel.

“There was a lot of confusion on the flight, because the national news knew more about the situation than we did,” Ms Lee said.

Another passenger, Naomi Harm, was stranded on the tarmac on a Delta flight from Sacramento, California.

She told the BBC that airline staff kept the passengers in good spirits by communicating regularly and handing out any food and drinks they had available.

She said one passenger seated close to her was escorted down to the aircraft’s cargo area to give insulin to his diabetic pet dog in the hold by an air marshal.

After almost four hours she was guided out in darkness after portable steps were found for them to disembark.

“Inside the terminal there were thousands all over, children crying. The air-conditioning wasn’t working and it was very hot inside,” she said.

The local police department confirmed they had sent extra officers to help the airport with the situation.

About 30,000 passengers were reportedly affected by the power cut.

Atlanta is located within a two-hour flight of 80% of the US population, making the city a major port of entry into the US and a common stopover for travel within the country.