Blue Origin plans liftoff of the New Shepard rocket on its NS-19 mission at 8:45 a.m. CST from its Corn Ranch spaceport 160 miles east of El Paso. Launch personnel postponed a launch Wednesday because of high winds in the area.

Previous launches in July and October carried Bezos and William Shatner, 90, respectively. Bezos also invited former aviator Wally Funk, 82, to fly with him in July. Those previous crews were composed of four people.

Shepard Churchley is the eldest daughter of Alan Shepard, for whom Blue Origin named its suborbital rocket. He was the first American in space in 1961, and died in 1998.

His daughter chairs the board of trustees of the non-profit Astronaut Scholarship Foundation, which raises funds for college students.

The company’s invitations to high-profile people like Strahan and Shatner are an orchestrated promotion tactic to boost interest in space tourism, said Rachel Fu, professor of tourism and hospitality at the University of Florida.

It’s basically a free flight in exchange for an “endorsement” of the experience, although that exchange may not be a formal agreement, Fu said.

“Carrying celebrities or family members may build trust of the company brand and its safety,” she said.

“The mix of passengers could be seen as promoting the diversity of backgrounds in commercial spaceflight, and may enhance emotional connections to the mission and help reduce anxiety over risk.”

The publicity generated by the actor who portrayed Capt. James Kirk on Star Trek will get full treatment during a one-hour special called Shatner In Space starting Dec. 15 on Bezos’ streaming service, Amazon Prime Video.

The flight of New Shepard will takes a little more than 10 minutes as the rocket propels the capsule to the Karman Line, the international definition of space about 62 miles high.

After a few minutes of weightlessness, the capsule will descend quickly and land assisted by parachutes in the Texas desert. 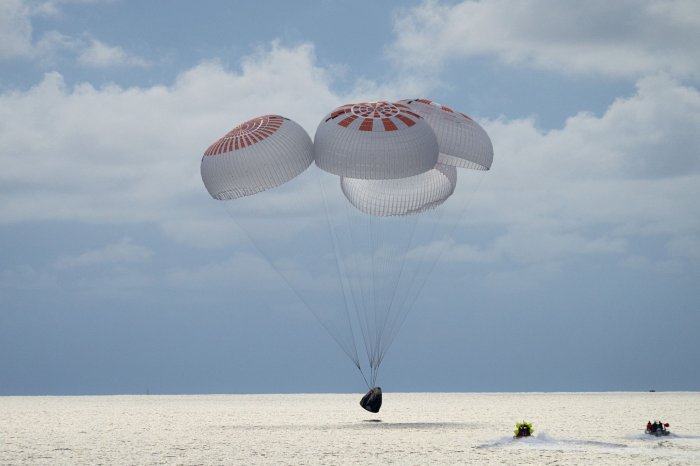 Inspiration4, the world’s first all-civilian mission to space, safely returns to Earth while splashing down on the Atlantic Ocean outside of Florida, on September 18, 2021, following their groundbreaking three-day mission. Photo courtesy of SpaceX | License Photo