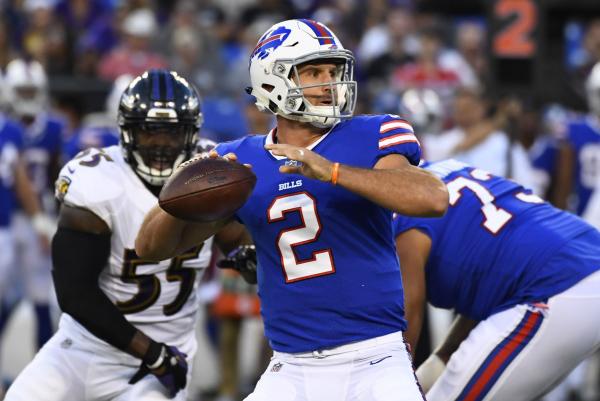 ORCHARD PARK, N.Y. — Buffalo Bills rookie quarterback Nathan Peterman was escorted to the locker room and evaluated for a concussion during the third quarter of Sunday’s snow-ravaged game against the Indianapolis Colts.

Also, Buffalo wide receiver Kelvin Benjamin injured his right knee during the third quarter. He returned in the fourth quarter, however.

Peterman was injured after he dove at the end of a 2-yard run and was tackled by Colts defenders Antonio Morrison and Johnathan Hankins. There was no penalty on the play and Peterman appeared to hit his head on the ground.

Peterman was able to walk to the sideline with assistance from trainers.

The Bills were already without starting quarterback Tyrod Taylor, who missed the game with a bruised knee sustained in last week’s 23-3 loss to the New England Patriots.

Joe Webb replaced Peterman, who was 5-of-10 passing for 57 yards and a touchdown through heavy snow and wind in his second career start.

Benjamin, who had missed the last two games with a torn meniscus in the right knee, was injured when he fell to the ground while trying to catch an errant pass from Webb.