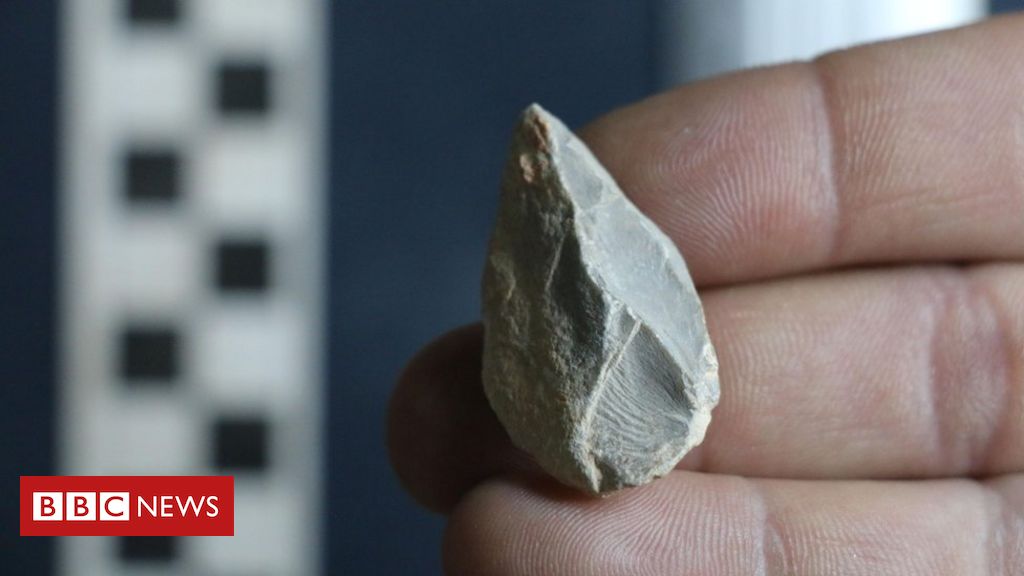 Humans settled in the Americas much earlier than previously thought, according to new finds from Mexico.

They suggest people were living there 33,000 years ago, twice the widely accepted age for the earliest settlement of the Americas.

The results are based on work at Chiquihuite Cave, a high-altitude rock shelter in central Mexico.

Archaeologists found thousands of stone tools suggesting the cave was used by people for at least 20,000 years.

During the second half of the 20th Century, a consensus emerged among North American archaeologists the Clovis people had been the first to reach the Americas, about 11,500 years ago.

The Clovis were thought to have crossed a land bridge linking Siberia to Alaska during the last ice age.

This land bridge – known as Beringia – subsequently disappeared underwater as the ice melted.

And these big-game hunters were thought to have contributed to the extinction of the megafauna – large mammals such as mammoth, mastodon and various species of bear that roamed the region until the end of the last ice age.

As the “Clovis First” idea took hold, reports of earlier human settlement were dismissed as unreliable and archaeologists stopped looking for signs of earlier occupation.

But in the 1970s, this orthodoxy started to be challenged.

And since the 2000s, other pre-Clovis sites have become widely accepted – including the 15,500-year-old Buttermilk Creek Complex in central Texas.

Now, Ciprian Ardelean, from the Universidad Autónoma de Zacatecas, Mexico, Tom Higham, from the University of Oxford, and colleagues have found evidence of human occupation stretching back far beyond that date, at the Chiquihuite site in the central-northern Mexican Highlands.

The results have been published in the journal Nature.

“This is a unique site, we’ve never seen anything like it before,” Prof Higham, the director of Oxford’s Radiocarbon Accelerator Unit, told BBC News.

“Anyone can see that these are deliberately manufactured stone tools and there are lots of them.

“And so, it’s a very exciting site to have been involved in.”

The team excavated a 3m-deep (10ft) stratigraphic section – a sequence of soil layers arranged in the order they were deposited – and found some 1,900 stone artefacts made over thousands of years.

The first, radiocarbon dating, relies on the way a radioactive form of the element carbon (carbon-14) is known to decay over time.

Using two different techniques “added a lot of credibility and strength, particularly to the older part of the chronology”, Prof Higham said.

“The optical dates and [radiocarbon] dates are in good agreement,” he said.

And the findings could lead scientists to take a fresh look at controversial early occupation sites elsewhere in the Americas.

“In Brazil, there are several sites where you have stone tools that look robust to me and are dated 26-30,000, similar dates to the Chiquihuite site,” Prof Higham said.

“This could be an important discovery that could stimulate new work to find other sites in the Americas that date to this period.”

Prof David Meltzer, from Southern Methodist University in Dallas, Texas, who was not involved in the research, said the findings were “interesting”. But he explained: “It is not enough to argue that the stone specimens could be cultural (artifacts), one has to show that they are not natural.” Natural processes could mimic some types of stone tool, Prof Meltzer said.

Second, he explained: “With a stone tool tradition that long-lasting, one expects it would have been far more widespread in the region, raising the question of why that technology hasn’t been spotted elsewhere,” adding: “Perhaps more important, with modern humans one expects to see evidence of technological and cultural change over such a long span of time.”

Finally, he said, “the cave is 1,000 metres above the valley floor, but leaving aside the issue of why not camp closer to the valley floor, why keep coming back to that same place on ‘a relatively constant basis’ over such a long period of time? I find that curious. Not many sites have that kind of long term repeated occupation, unless there is something quite useful / available at the spot”.

Between 26,000-19,000 years ago, sea levels were low enough for people to cross easily from Siberia to America via the Beringian land bridge. But what about during earlier times?

“Before 26,000 years ago, the latest data suggest that Beringia might have been a rather unattractive place for humans to be. It might well have been boggy and very difficult to traverse,” said Prof Higham.

“We still think the most likely scenario is for people to have come on a coastal route – hugging a coast – perhaps with some kind of maritime technology.”

While people seem to have been in the Americas before 26,000 years ago, they were probably thin on the ground. It’s only much later, between 14,000 and 15,000 years ago, that populations increase substantially.

It coincides with the temperature spike at the end of the last Ice Age, when jumps of 7C are seen in the space of two to three years.

But they could not find a strong enough signal.

And scientists will now want to understand how these older populations relate to later human groups who inhabited the continent.

In the same issue of Nature, Prof Higham and Lorena Becerra-Valdivia, also from Oxford, describe how they used ages from 42 archaeological sites in North America and Beringia to explore how humans expanded.

The results reveal the signal of a pre-Clovis human presence stretching back thousands of years before the Clovis people.