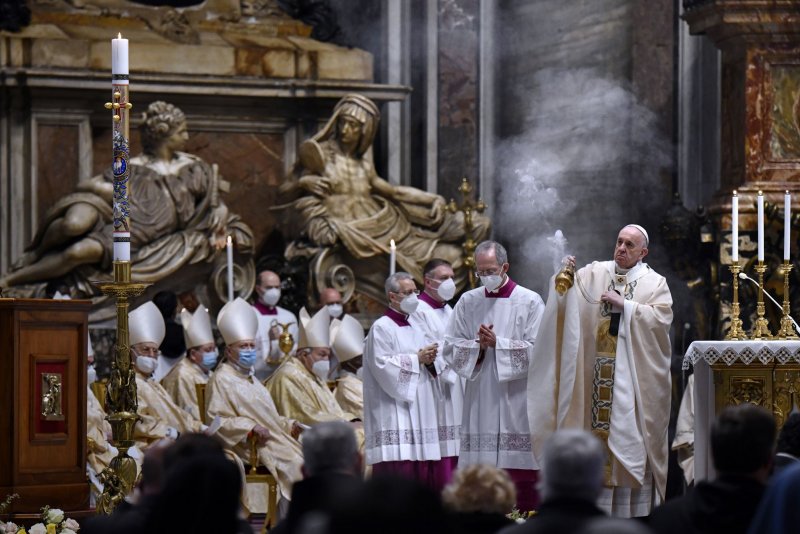 April 4 (UPI) — Christians worldwide celebrated Easter Sunday for the second year amid coronavirus restrictions, including lockdowns in some nations, as the death toll mounted despite widespread rollout of life-saving vaccines.

COVID-19‘s deaths and cases have grown exponentially. Last Easter there were 122,600 fatalities and 1,969,718 infections in tracking by Worldometers.info. So far Sunday, the totals are 2,863,566 deaths and 131,817,713 cases. Meanwhile, nearly 653 million doses have been administered with most types requiring two shots among a population of 7.9 billion.

Though the pandemic is somewhat stabilizing in the United States, it’s surging in Brazil and India, the nations with the second and third most fatalities.

Coronavirus has been subsiding in Britain after a wave from a variant, B.1.1.7, that emerged in the kingdom.

Britain reported 10 deaths in back-to-back days Saturday and Sunday from a peak of 1,823 on Jan. 20. In March, it went under triple digits for the first time since the middle of October.

Helping control the pandemic is a high vaccination rate: 47.0% for at least one dose and 7.8% fully vaccinated. That compares with 31.4% at least one dose in the United States, 8.8% in Brazil and 4.7% in India.

The top vaccine makers are U.S.-based Pfizer and Germany’s BioNTech, Moderna and Johnson & Johnson, both based in the United States, and AstraZeneca, which is developed with Oxford University, in Britain. China and Russia also have developed vaccines.

England is easing out of a lockdown with outdoor gatherings, including sports facilities, allowed beginning last Monday though non-essential shops, gyms and entertainment venues remain closed. Also, pubs and restaurants are closed except for takeout.

On Monday, Prime Minister Boris Johnson plans to announce a system to phase in sporting matches, theaters and other major public events, as well as traveling overseas for holidays. He also plans to unveil a vaccine passport system.

In an Easter message, Johnson said: “This has been a very tough 12 months. But, as ever, the arrival of Easter brings with it new hope. And, this year more than ever, it brings the promise of brighter days ahead for us all.”

Elsewhere in Europe, France and Italy are under lockdowns.

Italy entered a three-day Easter lockdown with all regions in the “red zone,” which means non-essential travel is banned. However, home dining is allowed with a maximum of two non-household adults and churches are open. For the second year, Pope Francis delivered his Easter message to a nearly empty St. Peter’s Basilica. And no faithful were allowed outside.

Italy is in the midst of a third wave with the first lockdown ending in June.

On Wednesday, French President Emmanuel Macron extended a lockdown to the entire country and closed schools through the end of April.

In a televised address, Macron said a “more dangerous, contagious and deadly” virus is surging.

“If we are choosing to close down the whole country it’s because no area of the country is spared,” Macron said. “Everywhere the virus is spreading faster and faster and everywhere, hospitalizations are rising.”

And deaths were last more than 500 on Feb. 13 with Sunday’s increase 357 from a peak of 635. Russia is inoculating residents with Sputnik V vaccines and selling it to other countries.

Germany’s lockdown has been extended through April 18. And during the Easter holiday, there was an even stricter lockdown from Thursday through Monday. More than 10,000 coronavirus deniers took to the streets in Stuttgart on Saturday to protest the restrictions.

Germany and Spain require people arriving by land from France to present a negative COVID-19 test.

Regions throughout Spain except in Madrid, Extremadura and the Balearic and Canary Islands restricted travel over the Easter break in addition to a nighttime curfew.

India is the only Asian nation in the top 10 for deaths and cases.

More than half of the infections reported Sunday, 49,447 are in western Maharashtra, an industrialized state that includes Mumbai. Chief Minister Uddhav Thackeray on Friday warned of a possible lockdown in the state, urging everyone to follow COVID-19 guidelines.

Although several drugmakers manufacture vaccines in India, the nation only has fully vaccinated 0.7% of its 1.4 billion population.

At the other extreme, Israel, which is considered part of Asia, has fully vaccinated 53.2% of its population, only behind Gibraltar at 84.2%. Its death toll is 6,236.

COVID-19 originated in Mainland China, but the nation has reported only a few deaths since April and stands in 56th at 4,636 behind Honduras with 4,640. China added 21 cases Sunday and has the world’s largest population with 1.5 billion.

On Sunday, Prime Minister Yoshihide Suga said that he would expand emergency measures if needed to contain a new wave of infections. Osaka is already under an order and Tokyo is among “all possibilities” being considered.

Although infections are far below the peak, experts are concerned about a surge in mutations. And the Summer Olympics are only three months away. Plus, Japan has vaccinated only 0.7% of the population without at least one dose with inoculations 1 1/2 months ago.

South Korea, which administered its first vaccines on Feb. 26, is at 1.8%.

South Korea is in the midst of an outside dining curfew, for two weeks and the nation plans to introduce a digital vaccination certification system, Prime Minister Chung Sye-kyun said Thursday.

Brazil is facing dire situations as hospitals are becoming overwhelmed with many intensive care units more than 90% occupied. And cases are spiking among young people.

“The country is in a situation of collapse of the health system. At the same time, the pandemic has been gaining new characteristics affecting younger age groups: 30 to 39 years, 40 to 49 years and 50 to 59 years,” reads the report published Friday by Brazil’s Oswaldo Cruz Foundation.

The total number of coronavirus cases nationwide among all age groups grew by 319%.

On Monday, Brazil’s President Jair Bolsonaro, who has downplayed the threat of the coronavirus despite contracting it himself, changed six top ministers, including the health minister.

All but around 29,000 of the total deaths in North America are in Mexico, Canada and the United States.

Though the death toll stands at more than 204,011, last week the government reported excess deaths last year and the first six weeks this year have exceeded 417,000.

Mexico was the first Latin American nation to begin administering vaccinations, but the rate is low at 5.4% for at least one dose.

The nonessential travel ban among Mexico, Canada and the United States has been extended to April 21. It began one year ago in March.

Canada is lagging in vaccinations. The nation of 38 million has administered 6.2 million doses with 14.0% of its population getting at least one shot.

Amid fears of more contagious variants, as well as pandemic fatigue, several Canadian provinces, including Quebec, are imposing new restrictions on social gatherings and businesses.

Cases are up 72% from the beginning of the month, according to data from Canada’s public health agency.

Experts are especially concerned about an increasing number of younger people hospitalized with more severe illness.

“As the new variants spread, you will see that COVID-19 is killing faster and younger,” Adalsteinn Brown, co-chair of a panel of scientists advising Ontario Premier Doug Ford, said Thursday. “It’s spreading far more quickly than it was before, and we cannot vaccinate quickly enough to break this third wave.”

New Zealand’s deaths remain at 26 with the last one reported on Feb. 16 and Australia’s toll stands at 909 with the last two deaths occurring on Nov. 30 and Dec. 29.

New Zealand reported six cases Sunday, tallying 25 in one week, for a total of 2,507, and Australia was up three Sunday for 29,255, an increase of about 89 in seven days.

Australia’s vaccinations are ramping up since the debut on Feb. 21, nearly doubling in one week to close 692,000, which is 2% of the population getting at least one shot.

The nation marked Easter with reduced restrictions after last year’s events were canceled.

That included Sydney’s Royal Easter show with more than 60,000 attendees.

Among continents, Africa has the slowest rate of vaccinations with 0.9%, according to tracking by The New York Times. North America leads with 29%, followed by Europe at 17%, South America at 9.3%, Asia at 6.0% and Oceania at 19%.