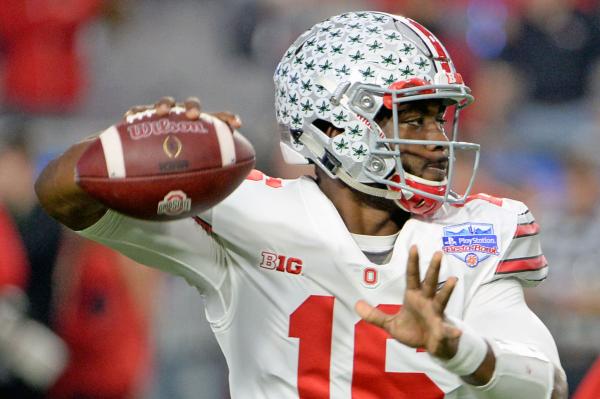 Wisconsin (12-1, 9-1) managed only 60 yards on 32 carries after averaging 243.3 yards per game through its first 12 contests. Freshman running back Jonathan Taylor, the conference’s leading rusher at 150.5 yards per game, was held to 41 yards on 15 attempts. Ohio State averaged 5.7 yards per carry to Wisconsin’s 1.9.

The Badgers looked unfazed in their first two drives, marching into the red zone after forcing a three-and-out on the Buckeyes’ opening series, but all momentum was erased when Denzel Ward intercepted Wisconsin quarterback Alex Hornibrook at the Ohio State 4-yard line. Hornibrook finished 19 of 40 for 229 yards and two interceptions.

The ensuing drive was the longest in the history of the Big Ten championship.

After avoiding a third-down sack near the goal line, Barrett scrambled for the first down, then found Terry McLaurin over the middle for an 84-yard touchdown pass on the very next play, capping a four-play, 96-yard drive. McLaurin finished with two catches for 92 yards in addition to the 84-yard score.

After a 34-yard punt pinned Ohio State at its own 2-yard line, Wisconsin tied the game at 7-7 on a 9-yard pick six by Andrew Van Ginkel with 2:08 remaining in the first quarter.

Barrett, whose 37 wins are the most by any quarterback in school history, shook off the turnover and responded with a 57-yard touchdown pass to Parris Campbell, giving the Buckeyes a 14-7 lead with less than a minute remaining in the quarter.

A 77-yard rush by J.K. Dobbins set up a 1-yard touchdown run by Barrett, who finished with 19 carries for 60 yards, extending the Buckeyes’ lead to 21-7 with 11:05 remaining in the first half. Dobbins’ run — the second longest in Big Ten championship history — was initially ruled a touchdown, but an official review deemed him out of bounds shy of the goal line.

Following a three-and-out by Wisconsin, Van Ginkel came up with his second turnover of the half, forcing and recovering a fumble at the Buckeyes’ 11-yard line, but the Badgers were forced to settle for a 28-yard field goal by Rafael Gaglianone.

Ohio State’s 21-10 halftime lead could have been larger, as the Buckeyes drove 49 yards to set up for a field goal on the final play of the half, but Wisconsin defensive back Nick Nelson blocked Sean Nuernberger’s 43-yard attempt as time expired.

The Buckeyes slowed the tempo in the second half, riding Dobbins’ big day while scaling back Barrett’s involvement to that of a game manager.

Wisconsin cut the deficit to three after a roughing the passer penalty extended its drive, setting up a 1-yard touchdown rush by Chris James. A successful two-point conversion attempt cut the Buckeyes’ lead to 24-21. Nuernberger’s 20-yard field goal with 5:02 remaining was the final scoring play after Wisconsin’s failed conversion attempt on 4th-and-20 allowed the Buckeyes to kneel for the final three plays.

NOTES: Wisconsin’s No. 4 ranking was its highest since October 1963, when it was No. 2 in the polls. … Entering the game, 47 percent of Ohio State’s completions allowed were to running backs and tight ends, the highest such mark in the nation. … RB Jonathan Taylor accounted for 36.3 percent of the Badgers’ yards for scrimmage in their first 12 games, trailing only Heisman-hopeful RB Bryce Love of Stanford (39.8 percent) in that category. … Ohio State’s offense ranks fourth the nation, while its defense ranks eighth, making the Buckeyes the only FBS team to crack the top-10 in both categories. … The Badgers entered the game with the second-best third-down conversion rate in the nation (50.7 percent) but converted only 5 of 16 against the Buckeyes. … Urban Meyer improved to 5-2 against top five teams at Ohio State (13-5 all-time).