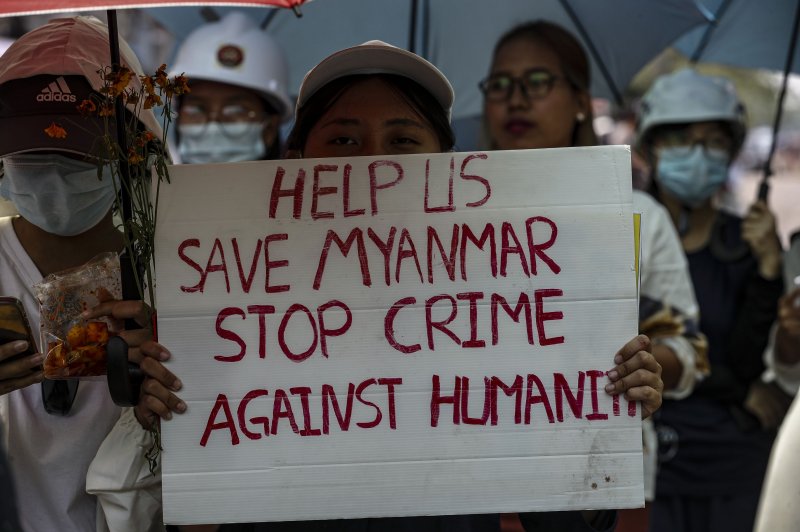 March 23 (UPI) — The European Union and the United States have leveled new rounds of sanctions against Myanmar’s military leadership over its February coup and subsequent escalation of violence deployed against protesters.

The EU announced the sanctions Monday targeting 11 people, 10 of who are among the highest ranks of the Myanmar military, known as the Tatmadaw, including its commander-in-chief, Min Aung Hlaing. The 11th person is the chair of the Union Election Commission over his role in cancelling the results of the 2020 Myanmar parliamentary elections.

The Tatmadaw seized control of the country Feb. 1 in a coup on accusations that the fall elections were fraudulent, declaring itself the State Administrative Council and arresting Daw Aung San Suu Kyi and other members of Myanmar’s democratically elected government.

Millions who have since flooded into the streets nationwide in opposition to the coup have been met by escalating state violence. On Monday, the death toll rose to 261 after three people were shot dead in the northern city of Mandalay, the country’s Assistance Association for Political Prisoners said in its daily update.

More than 2,680 people have also been arrested, charged or sentenced in relation to the coup, it said.

“On Myanmar, we took stock of the situation in the country, which sadly continues to deteriorate dramatically following the military coup,” EU High Representative Josep Borrell said in a press conference.

The sanctions include travel bans and asset freezes and follows the EU’s 27-member states on Feb. 22 agreeing to impose targeted sanctions while withholding direct financial support from the government. It already maintained an arms embargo around the country.

“The excesses of violence in Myanmar are not acceptable,” Heiko Maas, Germany’s minister of foreign affairs, said Monday. “We in the EU will not be able to avoid imposing sanctions, specifically against those responsible. At the same time, we continue to rely on dialogue in order to achieve a peaceful solution.”

Many of those sanctioned have already been targeted by Britain, Canada and the United States, which also on Monday blacklisted Myanmar chief of police Than Hlaing and Bureau of Special Operations commander Lt. Gen. Aung Soe.

The United States also sanctioned army units the 33rd and 77th Light Infantry Divisions for engaging in actions that prohibit, limit or penalize the freedom of expression or assembly of Myanmar protesters.

“The Burmese security forces’ lethal violence against peaceful protesters must end,” Andrea Gavki, director of the U.S. Treasury’s Office of Foreign Assets Control, said in a statement while referring to Myanmar by its old name. “Treasury will continue to use the full range of our authorities to promote accountability for the actions of the Burmese military and police.”

Than Hlaing was sanctioned for being a leader of the police force, which has deployed violence against protesters since he was made its commander Feb. 2, the Treasury said, adding that under his leadership, the force “has gone from attacking peaceful protesters with water cannons, rubber bullets and tear gas to using live ammunition.”

Aung Soe was sanctioned in response to those under his command conducting “vicious attacks” on peaceful protesters while armed with weapons meant for the battlefield.

The two military units were targeted for employing excess force that resulted in the deaths or protesters.

“Both the 33rd LID and 77th LID are part of the Burmese security forces’ planned, systemic strategies to ramp up the use of lethal force,” U.S. Secretary of State Antony Blinken said in a statement.

“Today’s actions send a strong signal that we will follow through on our pledges to continue to take action against coup leaders and those who perpetrate violence,” he said.