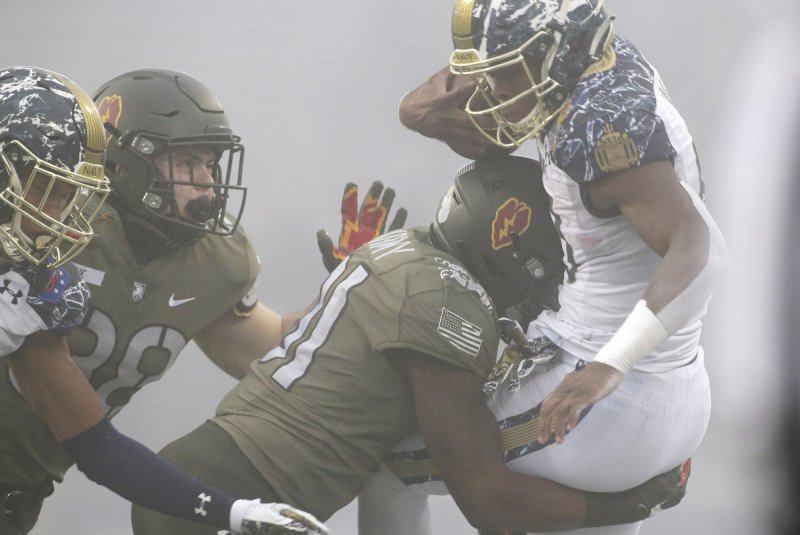 Feb. 1 (UPI) — Nearly half of all concussions sustained by college football players occur during preseason practice, according to a study published Monday by JAMA Neurology.

Players also experienced twice as many head impacts during the preseason as they did in practices and games in the regular season, the data showed.

The findings suggest that changes to policies and procedures regarding physical contact in general, and head-to-head contact specifically, during preseason practices could help reduce players’ risk for concussions without “major modification to game play,” the researchers said.

“The higher incidence of concussion in the preseason is likely due to several factors, including the total hours and intensity of training, heavy emphasis on full contact drills — [such as] tackling, blocking, etc. — and the volume of participants in those activities,” study co-author Michael McCrea told UPI.

“Over the course of the season, it’s common for football teams to reduce the frequency of full contact drills, thereby also reducing head-impact exposure and risk for concussion from full contact activities,” said McCrea, co-director of the Center for Neurotrauma Research at the Medical College of Wisconsin.

The findings are based on an analysis of data on head impacts and injuries for 658 players at six Division I NCAA college football programs over a five-year period, according to the researchers.

The six schools were all participants in the Concussion Assessment, Research and Education Consortium, a partnership between the NCAA and the U.S. Department of Defense that is looking into the effects of concussions.

The 658 players, most of them starters on their respective teams, were fitted with an in-helmet Head Impact Telemetry System developed by sports equipment manufacturer Riddell.

Sixty-eight players suffered a diagnosed concussion, with 49% reported during preseason, the researchers said.

“The overall number of practices and the volume of players participating in those drills compared to games suggests that reducing full contact activities in practice could do the greatest good in reducing incidence of head-impact exposure and concussion throughout the full football season,” McCrea said.

“The most effective strategies will benefit from buy-in at the institutional level from athletic administration, coaches and athletes themselves,” he said.