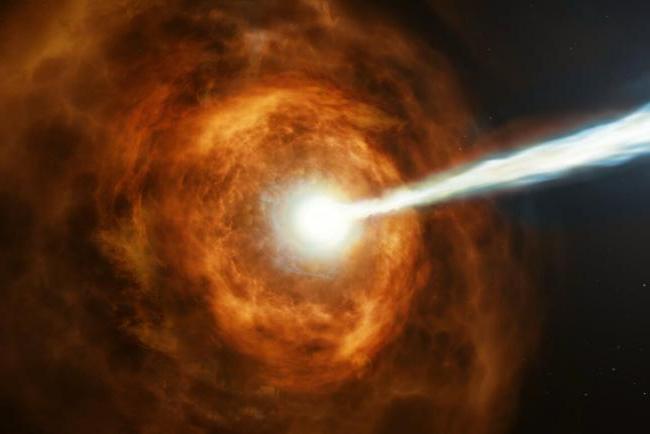 Nov. 21 (UPI) — With the help of the Hubble Space Telescope, scientists have characterized the gamma-ray burst GRB 190114C, which featured the highest energy ever recorded.

Earlier observations suggest material ejected during the gamma-ray burst explosion reached speeds of 99.999 percent the speed of light. As this material passed through gas surrounding the collapsing star, a shock wave was produced. The shock wave triggers the burst of gamma rays measured by observatories on Earth.

The newest Hubble images — described this week in the journal Nature — are helping scientists begin to figure out exactly how the collapsing cores of dying massive stars produce such high energy gamma rays.

“Hubble’s observations suggest that this particular burst was sitting in a very dense environment, right in the middle of a bright galaxy 5 billion light years away,” study author Andrew Levan, a scientist with the Institute for Mathematics, Astrophysics and Particle Physics Department of Astrophysics at Radboud University in the Netherlands, said in a news release. “This is really unusual, and suggests that might be why it produced this exceptionally powerful light.”

Levan and his colleagues were able to compliment Hubble’s observations with those of the European Southern Observatory’s Very Large Telescope and the Atacama Large Milimeter/submilimeter Array, or ALMA.

Together, the observations of the powerful observatories helped scientists confirm that the gamma-ray burst was located within an especially dense region of space — within the so-called nuclear region of a massive galaxy. Most gamma-ray bursts are found in more sparsely populated regions of space, and scientists suspect the unusual positioning of GRB 190114C may have facilitated its record-setting energies.

“Scientists have been trying to observe very-high-energy emission from gamma-ray bursts for a long time,” study lead study author Antonio de Ugarte Postigo of the Spain’s Institute of Astrophysics of Andalusia. “This new observation is a vital step forward in our understanding of gamma-ray bursts, their immediate surroundings, and just how matter behaves when it is moving at 99.999 percent of the speed of light.”