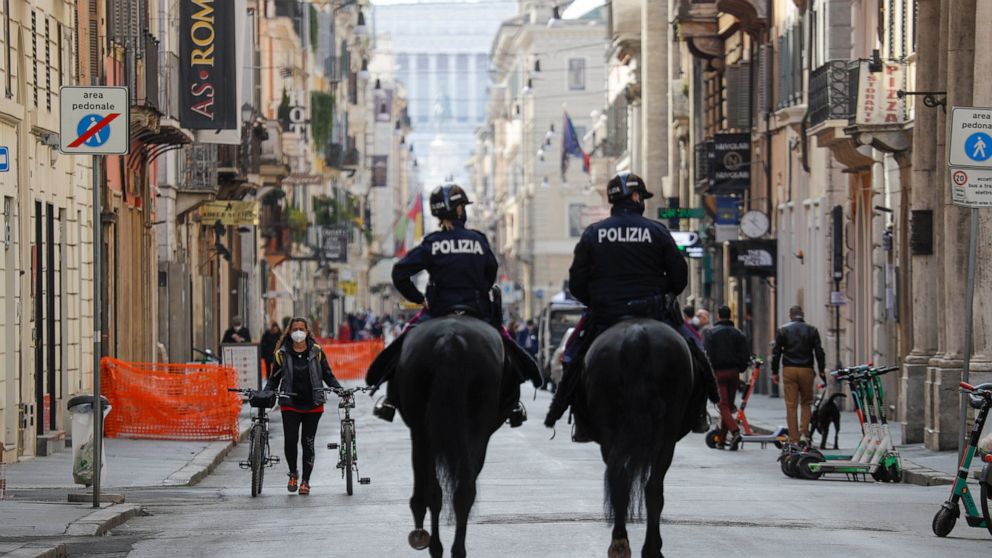 The government had announced last month that it would place all regions into the strictest “red zone” lockdown over the Easter weekend to limit the chances of contagion, taking the same precautions it enforced over Christmas and New Year’s.

Travel between regions and visits to relatives were being limited through Monday. Nonessential shops were closed and restaurants and bars were only open for take-out.

“People are tired, but they are aware that protecting health is essential in these times,” said Maj. Fabio Palletta, a Carabinieri military police officer manning a checkpoint in Rome on Saturday, one of many set up around the country this weekend to ensure people on the roads were authorized to travel.

The Interior Ministry also ordered up extra foot police patrols to break up large gatherings in squares and parks, which over Easter are usually packed with picnic-goers.

“I’m glad they are doing checks. It means something is working in this whole mess,” said Amato Monatanari, who was pulled over for a check in Rome.

Italy, where Europe’s outbreak began, has recorded more than 110,000 COVID-19 dead, more than any other European country but Britain. Another 21,000 infections were reported Saturday in Italy, along with 376 dead.

An estimated 87% of Italy’s newest cases have been traced to the highly contagious variant first detected in Britain. But the Health Ministry reported Friday that for the second week in a row, new cases had “slightly diminished.”

But because Italian hospitals in most regions are still well over their COVID-19 capacity in both intensive care units and other wards, the ministry concluded that new infections were still “too high … to allow any reduction in current restrictive measures.”

Italians, however, are upset over the country’s stumbling vaccination campaign, which despite having promised to prioritize older people has left many of Italy’s eldest, most vulnerable people behind while teachers, police officers and other professional workers get their jabs.

The Lombardy region, Italy’s biggest, has suffered more COVID-19 infections and deaths than any other but still has had a faltering vaccination campaign, earning a personal visit this week from Italy’s new virus czar, Gen. Francesco Figliuolo.

“There are things that aren’t going well,” Figliuolo said. “We’ll note them, and then we’ll fix them together.”

More than three months into Italy’s nationwide vaccination campaign, Lombardy this week opened a new centralized appointment portal after its previous system sent some elderly people hundreds of kilometers (miles) from home to get a jab and left others unable to get an appointment.

Lombardy’s embattled regional governor, Attilio Fontana, acknowledged “some difficulties” but insisted that they hadn’t impacted the overall vaccination campaign. He said the criticism of the regional effort was “nauseating.”

Italy has administered 10.8 million vaccines nationwide, though only 3.3 million of the country’s 60 million people have received both doses. Lombardy, which counts one sixth of the population and has long prided itself on its health care system, has administered 1.7 million doses.

On Saturday in Sicily, a church opened its doors temporarily to become a pop-up vaccination center.

“For those who are Christians celebrating Easter, today means above all to be a good and honest citizens,” said the Rev. Michele Viviano, parish priest of the Salesian parish of Don Bosco in San Gregorio di Catania, Sicily.

“This means also cooperating with the immunization campaign, participating in it and organizing it,” he said.