Some may think that June’s short nights make it a bad month for stargazing, but this month will bring the best opportunity of the year to see one of our closest celestial neighbors.

People around the world can look to the night sky this month to see Jupiter shining bigger and brighter than it will at any other point this year. This is because Jupiter will be at opposition, when it is opposite side of the Earth than the sun. This is also around the time when the two planets are closest to each other.

The Jupiter opposition will take place on Monday.

“The Earth will basically be exactly between Jupiter and the sun, so the gas giant will be visible in the night sky dusk until dawn,” AccuWeather astronomy blogger Dave Samuhel said. The planet will rise in the east and track across the southern sky as the night progresses before setting in the west. 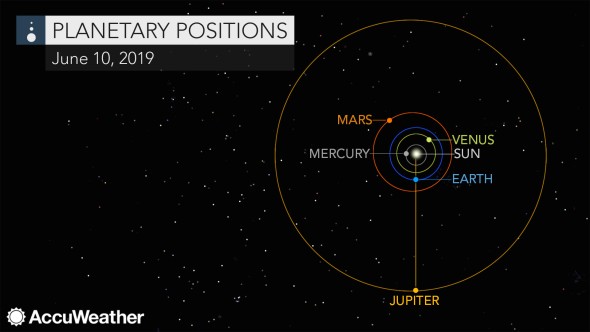 The best viewing conditions for spotting Jupiter on Monday night are forecast to be across the midwestern and west-central United States, where largely cloud-free conditions greet stargazers.

Meanwhile, widespread clouds and rain will obscure the sky for nearly all of the eastern United States. Disruptive clouds are also in the forecast for much of the central United States and Canada.

Folks that miss the Jupiter opposition on Monday night can wait until a night later this month when the sky is clear as the planet will appear nearly as bright throughout all of June. 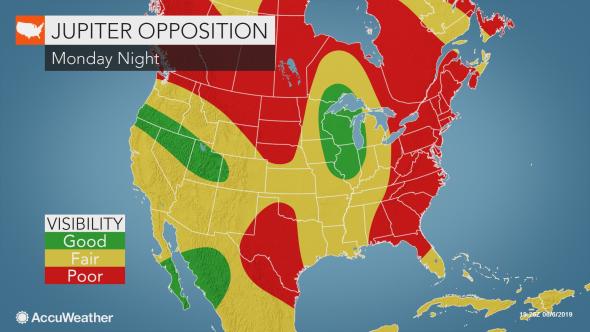 The Jupiter opposition is not a rare event, happening once every 13 months. The next time the Earth and Jupiter will be this close to each other will be during July of 2020.

How to see Jupiter through a telescope

Jupiter is bright enough where onlookers do not need a telescope to see it, but it will be an excellent target for novice stargazers to focus on to get familiar with how to use a telescope.

“Jupiter is a great target for a backyard telescope,” Samuhel said.

“You might think you have to spend a lot of money to get a telescope. In fact, there are plenty of telescopes out there that are cheaper than a pair of binoculars,” Samuhel said.

“On the night of the opposition, the moon will be visible in the sky,” he added.

Looking at Jupiter through the eyepiece of a telescope will also reveal more details about the solar system’s largest planet.

Jupiter’s four largest moons, known as the Galilean moons, are easily visible with a telescope, or even a pair of binoculars, and will look like four small white specks of light near the planet. Sometimes, not all four are visible at the same time as one or more of the moons may be passing behind Jupiter. 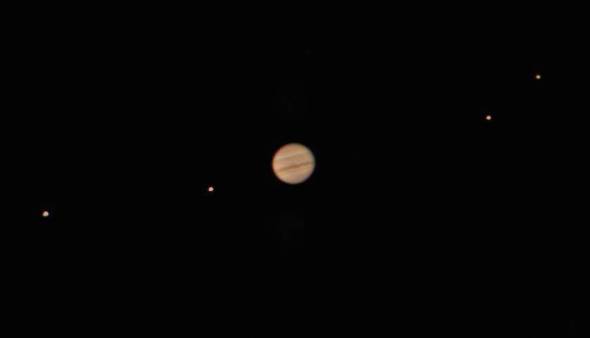 Jupiter and its four largest moons as seen through a telescope. Image courtesy of Jan Sandberg

With a more powerful telescope, stargazers may be able to see Jupiter’s red bands of clouds and perhaps even the well-known “great red spot,” a giant storm that has been swirling on the planet for hundreds of years.

The night of June 16 into June 17 will bring another good opportunity for people to spot Jupiter in the sky as it will appear next to the full moon. Saturn will also appear nearby in the sky, rising shortly after the Jupiter and moon.