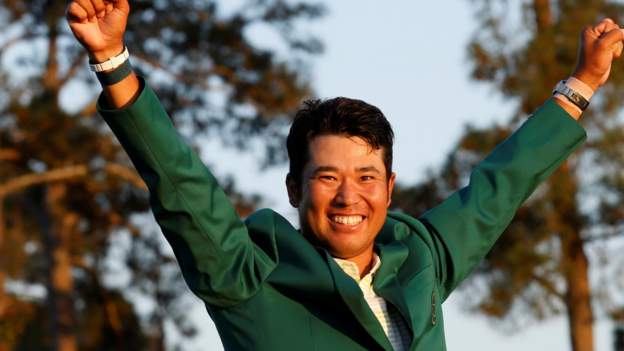 Hideki Matsuyama held off the field to win the Masters by one stroke at Augusta National and become the first Japanese man to claim a major title.

Matsuyama had a four-shot lead heading into the final day and, despite some nervy moments on Sunday, shot a one-over 73 to win on 10 under par.

American debutant Will Zalatoris was his closest challenger on nine under.

England’s Justin Rose, who led for two rounds, faded in the final 18 holes with a two-over 74 to end five under.

Xander Schauffele, playing with Matsuyama, birdied the 15th to close to within two shots, but hit his tee shot in the water on the 16th as his challenge finished with a triple-bogey six.

He ended on seven under in a share of third with fellow American and 2015 champion Jordan Spieth.

Spanish world number three Jon Rahm posted a final-day 66 to come in a further stroke back, alongside Australia’s Marc Leishman.

Scotland’s Robert MacIntyre impressed on his debut and finished joint 12th at two under to secure his place at next year’s Masters.

I am glad to open the floodgates – Matsuyama on historic win

A decade since Matsuyama was awarded the Silver Cup as the leading amateur at the 2011 Masters, the 29-year-old returned to record a victory that will resonate hugely in his home nation.

Japan has boasted major champions in 1977 LGPA Championship winner Hisako Higuchi and Hinako Shibuno, who won the Women’s Open two years ago, but the closest a male player had previously come to golf’s most sought-after prizes was Isao Aoki with a runner-up finish at the 1980 US Open.

“I am really happy. My nerves really didn’t start on the back nine, it was right from the start and right until the very last putt,” said Matsuyama.

“I was thinking about them [friends and family] all the way around. I am really happy I played well for them. Hopefully I will be a pioneer and many other Japanese players will follow and I am glad to open the floodgates.”

The foundations for Matsuyama’s success were laid on Saturday, returning from an hour-long delay for storms to shoot six under par through his final eight holes.

It meant the world number 25, who passed the time by sitting in his car playing games on his phone, signed for a stunning 65 that put him four strokes clear of the field on 11 under.

There were some early nerves on Sunday as Matsuyama sent his opening drive into the trees and watched his lead cut to one after Zalatoris made a birdie-birdie start to climb to nine under.

The 24-year-old American, who was aiming to become the first debutant to win since Fuzzy Zoeller in 1979, emerged as a surprise challenger but Matsuyama birdied the second, made smart par-saves at three and five and then completed the front nine with successive birdies.

After Zalatoris dropped shots at 10 and the Golden Bell 12th, Matsuyama’s advantage was stretched to six strokes.

Matsuyama, who had not won on the PGA Tour since 2017, could afford to cautiously bogey the par-three 12th but was fortunate to avoid sending his approach to the par-five 13th green into the azaleas and he went on to birdie the hole.

Playing partner Schauffele looked to have blown his challenge with four dropped shots in three holes through three, four and five.

But a run of four birdies that started on the 12th suddenly put the pressure on Matsuyama, especially when the leader hit his second shot on the par-five 15th over the green and into the water on the nearby 16th. That resulted in a dropped shot and his advantage was down to two.

Schauffele’s grandparents live in Japan and he says he knows enough of the language to share a joke with Matsuyama, but the American was is no mood for that when his tee shot on the par-three 16th dropped into the water as he recorded a triple-bogey six.

That handed Matsuyama the initiative once more, despite carding a bogey himself, and he held a two-shot lead heading down the 18th, where he converted a bogey putt to clinch the Green Jacket in front of the patrons gathered around the green.

Two-time runner-up Rose opened the tournament with a seven-under 65 and held on to that lead through the second round after a level-par 72. He shot 72 on Saturday to be in the group starting Sunday four behind Matsuyama.

But he could not sustain his bid for a first Green Jacket as he faded to finish five back.

“I enjoyed the week and it’s a bit more evidence that I love playing this golf course and I know how to play it,” 40-year-old Rose said after a round that featured six bogeys and four birdies. “Weirdly I felt I played better than I had all week. Just the putter went cold.

“I say that nothing really important happens before April. The major season is when it really counts. This is the start of it.

“Every month there is one to prepare for and work for and that is what I will be doing. This is a confidence boost and gives plenty of evidence that things are going in the right direction.”

MacIntyre will be back next year after a level-par 72 on the final day, with the top 12 and ties getting invites to return.

“I have to take the positives,” he said. “I have played great on a golf course I have never seen. I have only played it on computer games with my pals. If I had known this golf course more I could have been up there competing.”

Zalatoris was also making his debut and continued his impressive rise by ending the week as runner-up for his sixth top-10 finish in 15 starts on the PGA Tour this season, including a tie for sixth at the US Open last September.

“I am speechless,” he said. “To come one shot short is motivating, but for it to come at the Masters where I have been coming since I was nine years old is exciting,” he said.

“I will come back next year and hopefully go one better.”

Rahm, who became a father last week, carded the round of the day with an impressive bogey-free 66 to move to six under and post his fourth successive top-10 finish at Augusta.

The 26-year-old Spaniard is still searching for his first major title but is a combined 37 under par at the venue in that period, better than any other player.

American Patrick Reed, the 2018 champion, and Australia’s Cameron Smith, five months after his runner-up finish, also enjoyed top-10 finishes at four under and three under respectively.