Sept. 8 (UPI) — NASA said on Thursday that after two failed attempts last week, the next launch attempt for the first Artemis moon mission and first flight of the massive SLS rocket is at least two weeks away.

In a briefing Thursday, the space agency said it’s shooting for the next attempt on Sept. 23. If that doesn’t work, there’s also a window on Sept. 27.

NASA Associate Director Jim Free said those dates were chosen because they don’t conflict with other activities at the Kennedy Space Center on those days.

Free and NASA officials Mike Bolger and John Blevins stressed during the briefing Thursday that the type of hydrogen leaks that prevented the first two launch attempts are common when dealing with new vehicles like the SLS rocket, which is short for Space Launch System. NASA has been developing the SLS for more than a decade and Artemis I will be its first flight.

Bolger, exploration ground systems program manager at the Kennedy Space Center, said an 8-inch seal and smaller hydrogen fuel seals on the SLS are being examined and replaced. Work is ongoing and engineers hope everything will be fixed and tested by Sept. 17.

NASA hasn’t given a specific reason for the hydrogen leaks on the first two launch attempts, but Bolger said Thursday that the agency will conduct a “kinder, gentler” fuel loading process for the next attempt to decrease pressure.

“We’re looking at every possible thing and using some engineering judgment,” Blevin said.

While scrubbing launch dates can be costly, Free said NASA is in no rush to get Artemis I into space — for safety reasons and because failure could be catastrophic to the program.

“The cost of failure is much higher than the cause of scrubbing,” Free said. “We are doing everything we can do to get this right.”

Once it launches, Artemis I will fly more than a half-million miles to the moon and back over 42 days. The uncrewed mission is designed to test new systems and lay groundwork for astronauts to return to the moon’s surface sometime in 2025. 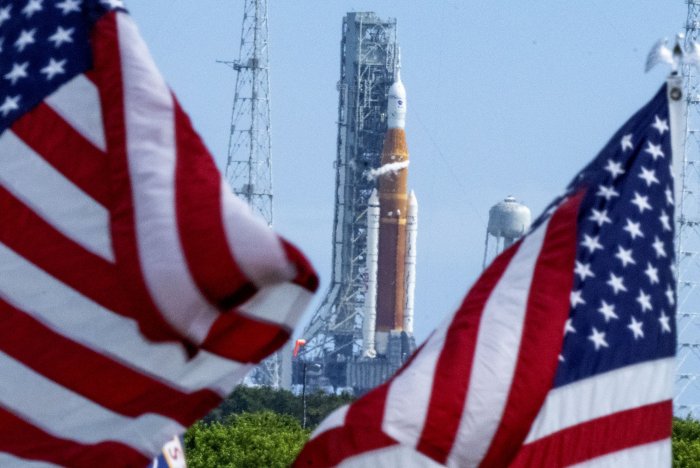 American flags wave in the breeze after the second launch attempt was scrubbed for Artemis 1 at Kennedy Space Center, Fla., on September 3, 2022. NASA has postponed the mission for at least 2 1/2 weeks due to a fuel leak. Photo by Pat Benic/UPI | License Photo