May 19 (UPI) — NASA scientists, as well as astronomers around the world, plan to install lunar observatories in the next few years to peer into the universe’s ancient past — just after the Big Bang.

Science equipment headed to the moon already includes a spectrometer built for launch in early 2022, known as ROLSES, which will study how sunlight charges the slight lunar atmosphere.

The acronym includes the word “sheath,” which refers to a field of energy created by sunlight reflecting from the bright lunar surface.

And NASA scientists are formulating plans for observatories on the far side of the moon, where darkness and clear sightlines could yield new discoveries about the universe before stars existed.

One bold plan to build a telescope in a lunar crater, the Lunar Crater Radio Telescope or LCRT, has received $ 500,000 for further study.

The project would transform a crater about one-half mile in diameter into an observatory by erecting a receiver and extending a wire mesh along the crater walls. Such components could be carried to the moon in a single mission.

Scientists propose to use robots or rovers to deploy the mesh, said Saptarshi Bandyopadhyay, a robotics technologist at NASA’s Jet Propulsion Laboratory in Pasadena, Calif.

“This idea has been around since 1960, since the manned missions to the moon started,” Bandyopadhyay told UPI. “Only now, we have the robotic technology to do this much cheaper than ever, and we have many new lunar missions planned.”

Those lunar missions include a series of rovers and landers that will help prepare NASA and the moon for human visits again, but the missions also will carry scientific equipment, such as the telescopes.

NASA has set a goal of 2024 to land people on the moon again, but the agency hasn’t received the funding from Congress that it requested. So that projection is in doubt.

But if and when sufficient funding becomes available, building a telescope in a lunar crater would be easier than building a similar structure on Earth, Bandyopadhyay said.

“Suspending something on the moon is significantly easier because the moon has 1/6th the gravity of Earth,” he said. “We can just anchor to the structure, to the crater walls.”

A radio telescope on the far side of the moon would be so isolated from light and Earth radiation that it could pick up faint, low-frequency radio waves left over from the dawn of the universe, said Jack Burns, a professor of astrophysics at the University of Colorado-Boulder.

But using a crater may not be necessary for such astronomy, said Burns, who is a principal investigator for a similar lunar radio telescope project proposed to NASA known as FARSIDE.

That project would stretch wires and sensors across a massive area 6 miles across, also deployed by robotic rovers, Burns said.

FARSIDE is NASA’s acronym for Farside Array for Radio Science Investigations of the Dark Ages and Exoplanets. In that context, the Dark Ages refers to the astronomical period when no stars existed.

So far, NASA hasn’t decided which of the two lunar observatories — LCRT or FARSIDE — would work best, or whether both could be needed, Burns said. NASA believes the proposals could be accomplished with mere millions of dollars compared to billions that such telescopes might cost on Earth.

“NASA will take a look at these two concepts and decide which to move forward with, or not, or potentially do both,” Burns said.

Astronomers around the world are eager to see such lunar observatories, said Joseph Silk, British-American professor of astrophysics with Johns Hopkins University in Baltimore.

Observatories on the far side of the moon would be capable of measuring radio waves from even farther back in time than the James Webb Space Telescope, which is planned for launch in October after nearly $ 10 billion in construction costs, Silk said in an interview.

“Lunar telescopes like this would represent the new frontier for cosmology, looking back over 13 billion years, which is long before there were any stars at all,” Silk said. “At that time, only gases existed, during the period after the Big Bang.”

Silk said he would like to see both the FARSIDE and LCRT telescopes built because each would offer slightly different advantages. FARSIDE would have a broader array of sensors, but LCRT would be more sensitive at some frequencies.

“We’re going to the moon, anyway, so we can have these new astronomy instruments piggyback on lunar missions for supplemental funding,” Silk said. 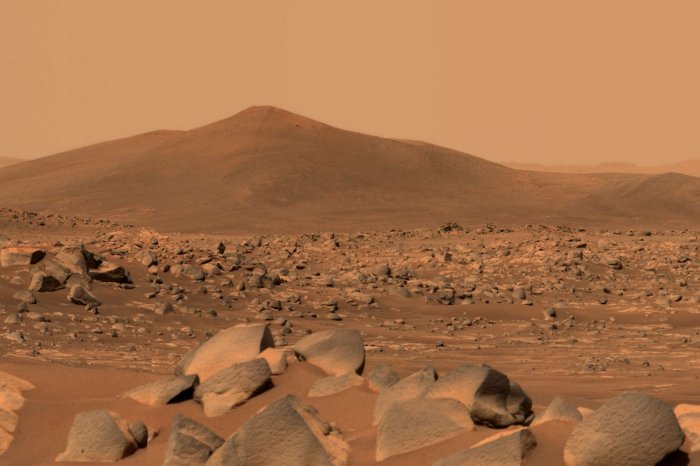 NASA’s Perseverance Mars rover used its dual-camera Mastcam-Z imager to capture this image of “Santa Cruz,” a hill about 1.5 miles away from the rover, on April 29. The entire scene is inside of Mars’ Jezero Crater. The crater’s rim can be seen on the horizon line beyond the hill. Photo courtesy of NASA | License Photo