Oct. 30 (UPI) — NASA and SpaceX on Saturday scrapped plans to send astronauts to the International Space Station after a large mid-Atlantic storm caused weather issues along the flight path.

The Crew-3 launch, which was set to launch Sunday, is now scheduled to take place 1:10 a.m. EDT Wednesday, when weather conditions were expected to be 80% favorable. The NASA astronauts will launch on SpaceX’s Crew Dragon spacecraft and Falcon 9 rocket from Kennedy Space Center in Florida.

Dxperiments include multiple studies of astronaut health during long periods in space, plant growth without soil in microgravity and a demonstration of sensors that could help flying robots navigate spaceships like the orbiting laboratory.

In addition to science experiments, the astronauts plan to conduct several spacewalks to upgrade the space station and to welcome several private astronauts during their mission.

“Certainly, one of the pinnacles of your time on board is to have the opportunity to do a spacewalk,” Mashburn, 61, said at a recent press conference.

“But, what we’re doing day to day in the laboratory is going to be what many of us look forward to the most. It’s really special to be at the cutting edge of an event … humans have never experienced before,” Mashburn said.

Packed inside the capsule are freeze-dried healthy foods, like kale and oily fish, that are part of a study to see how they could boost astronauts’ awareness and overall health, Grace Douglas, lead scientist for NASA’s Advanced Food Technology research, said during a press conference.

The challenge is to provide food that can last for months in space without spoiling or losing nutrients, she said.

Barron and Chari are part of NASA’s Artemis corps who may visit the moon some day, so the time on the space station is vital training, Barron said at a press conference.

Paul Brinkmann contributed to this report. 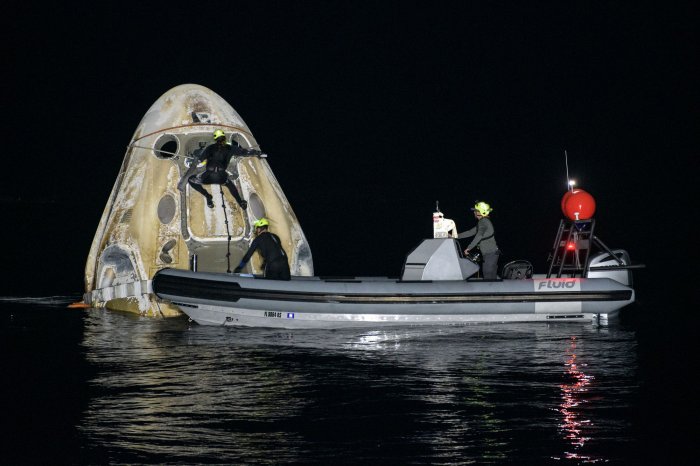