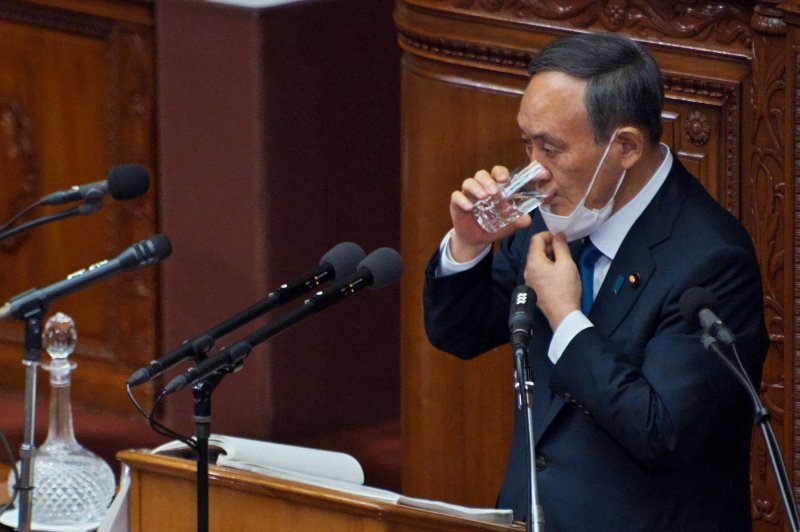 April 5 (UPI) — The majority of respondents to a Japanese poll said they would prefer to see Japanese Prime Minister Yoshihide Suga resign either immediately or by fall, according to a local press report.

The Yomiuri Shimbun reported that a recent survey of more than 1,000 people showed 47% of respondents said they would prefer Suga resign in September, when a ruling party leadership contest is scheduled to take place.

Another 12% of respondents said they would prefer Suga “resign immediately,” indicating nearly 60% of respondents do not see a need for Suga to stay in office in the long term, according to the Yomiuri.

Report of the Japanese survey comes as the health ministry disclosed data showing 80% of COVID-19 deaths occurred in Japan’s third wave of coronavirus infections that began in November, according to the Asahi Shimbun on Monday. Suga began his term of office in September.

Japan has not canceled the rescheduled Tokyo Olympics, but the virus appears to be spreading again after the lifting of a declaration of emergency in March. Last week, a torch relay through the city of Osaka was canceled at the last minute.

Japan’s third wave of coronavirus is over, but some analysts say Japan could be entering a fourth wave of infections. The trend continues as cities like Tokyo have witnessed a surge in infections.

Last month, health ministry officials were found to have taken part in an indoor party in violation of health guidelines. Health Minister Norihisa Tamura had said his subordinates had “betrayed the people’s trust.” It is unclear whether the officials were fired, however.

Japan also has struggled to keep up with vaccine demand, according to the Asahi.

Tokyo rolled out vaccines in February, but supplies remain limited, the report said.