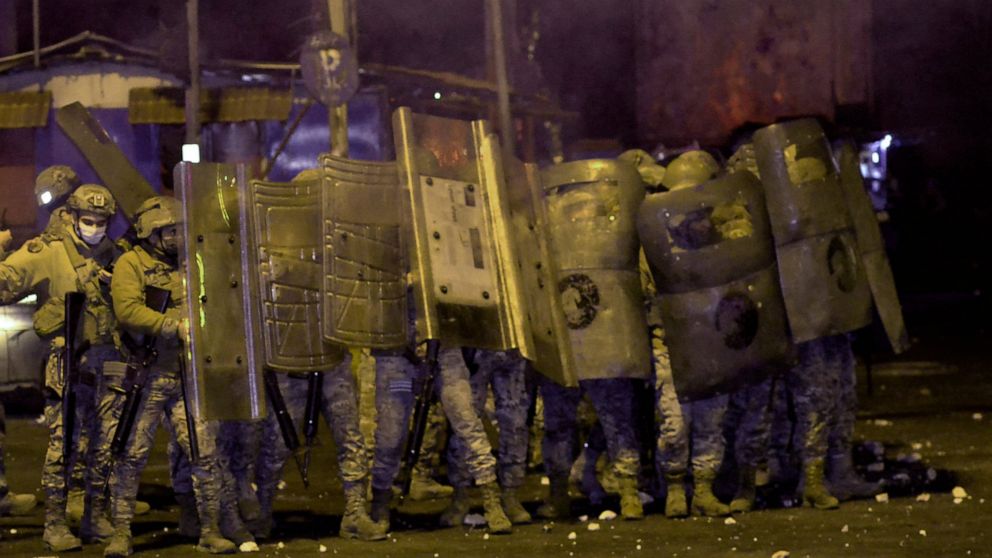 The violence in Tripoli, Lebanon’s second largest city and the most impoverished, marked a serious escalation in protests that began Monday and continued for three straight days into Wednesday night.

Dozens of young men have been taking part in the nightly protests, throwing rocks at security forces and in some cases torching vehicles. On Wednesday, protesters repeatedly tried to break into the municipal building. Some lobbed hand grenades at security forces, who responded with water cannons, volleys of tear gas and finally, live ammunition.

The National News Agency said 226 people were injured in the confrontations, including 26 police. One 3-year-old man died of his wounds, it said. The Red Cross said it transported 35 injured people to hospitals in the city.

The government has imposed a nearly month-long nationwide lockdown and round-the-clock curfew that lasts until Feb. 8, amid a dramatic surge in coronavirus infections. The measures have exacerbated a crippling economic and financial crisis that preceded the pandemic in this small Mediterranean country of nearly 5 million people and over 1 million refugees.

The Lebanese currency has crashed, losing over 80% of its value. Banks have imposed controls on withdrawals and transfers to protect dwindling foreign reserves. Unemployment and inflation have skyrocketed and tens of thousands have been thrown into poverty.

While the protests are ostensibly against the lockdown measures, they reflect the growing anger over authorities’ inaction and negligence in the face of the country’s meltdown.

A power struggle between the president and prime minister-designate and fighting over Cabinet seats has blocked the formation of a new government, crucial to enacting reforms that would unlock foreign financial assistance. The government resigned in August, following the massive explosion at Beirut port that killed over 200 people and wounded thousands.

The troubles have piled up since, including the recent surge in coronavirus cases largely blamed on a decision to relax lockdown measures during the holidays. Some 80,000 expatriates traveled to the country to celebrate Christmas and New Years with family and friends.

Hospitals are now overwhelmed with COVID-19 patients, reporting near full occupancy in intensive care-unit beds. Oxygen and ventilators are in short supply. Nearly 290,000 infections have been recorded since last February and 2,553 deaths amid record-breaking COVID-19 daily fatalities.

Lebanon’s ruling class has faced rising popular anger since protesters took to the streets in October 2019 in the largest-ever nationwide protests in the country. Demonstrators accused them of mismanaging and robbing the country of its resources and driving it into poverty. The protests later died down, in part because of the pandemic but also because the political class held on to power and divisions emerged among the demonstrators.