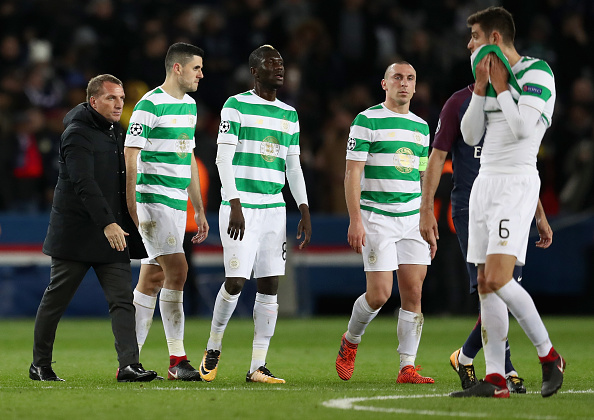 Celtic suffered another night of European anguish against Paris St Germain in a 7-1 thrashing in the Parc des Princes.

Former PSG youth player Moussa Dembele fired Celtic into a stunning first-minute lead but the home side reacted to the loss of the first goal in the Champions League with a Neymar double and goals from Edinson Cavani and Kylian Mbappe before the break.

The big-spending French club, who had won 5-0 at Parkhead on match day one, were even more ruthless in the second half with goals from Marco Verratti, Cavani and Dani Alves compounding the Hoops’ misery.

Celtic boss Brendan Rodgers had described the PSG as “the best of the best” and they made a good case for that accolade after their early setback, making it five Group B wins out of five.

The Scottish champions will now have to recover to try to clinch their Europa League spot in their final fixture against Anderlecht in Glasgow next month.

The home side had their three star attackers Neymar, Cavani and Mbappe in their line-up, all of whom had scored in Glasgow in what was Celtic’s record European home defeat.

However, after a less than minute Dembele turned the game on its head.

Dani Alves had conceded a corner with a careless pass back and when Olivier Ntcham played the ball to his fellow countryman he drove it high past keeper Alphonse Areola from 16 yards.

The home side were rattled but they levelled rather easily in the ninth minute through Neymar, the Brazilian taking a pass from midfielder Adrien Rabiot and from an angle steering it past Hoops keeper Craig Gordon.

The Scottish champion soon suffered another blow when right-back Mikael Lustig went off injured to be replaced by stand-in defender Nir Bitton.

Celtic, however, kept pressing PSG and Ntcham came close with a 20-yard drive but Neymar showed his class again in the 22nd minute when he played a one-two with Verratti and again clipped the ball past Gordon and in off the far post.

Cavani missed the target but only by inches with a left-footed volley before a header across goal from Neymar in the 28th minute, following a Julian Draxler cross, allowed him to knock in the third from close range.

Celtic were now in a state of shock.

The fourth came in the 35th minute when Celtic failed to deal with a Neymar free-kick into the box and the ball fell to the unmarked Mbappe who, from 10 yards, drove through Gordon and into the far corner.

Gordon then had to make a fine save at close range from a Mbappe volley after he had latched on to a sublime Neymar pass and the interval whistle arrived as respite.

Dembele screwed a Scott Brown pass wide of the target early in the second half as PSG began to play keep ball before stepping it up again in the latter stages.

Gordon had no chance in the 75th minute when Verratti drilled the ball through a packed defence after Mbappe’s cutback had been cleared to his feet.

Cavani volleyed in number six from a tight angle three minutes later before Dani Alves curled in number seven from outside the box as demoralised Celtic prayed for the final whistle to end their nightmare.