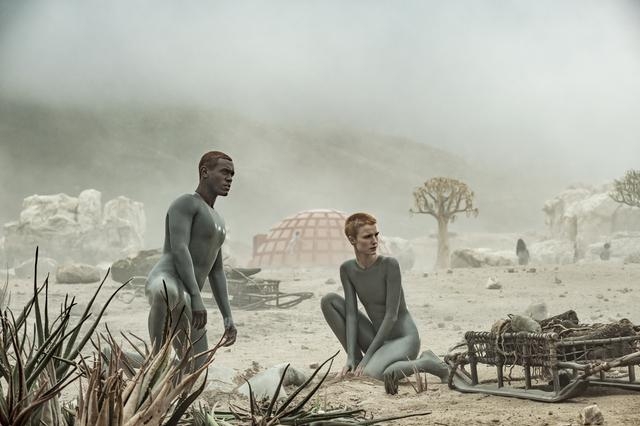 Raising a new generation gives humanity hope after Earth becomes uninhabitable. However, it also challenges Mother and Father to create their own programming, since children are unpredictable.

“No one really knows how to be a parent the first time, right?” Salim asked rhetorically on a Television Critics Association panel.

For Collin, the costume dictated some of her performance. The skin-tight, blue-gray suit restricted her movements enough to make her appear robotic.

“That helped us a lot with posture and the way we walked and ran,” Collin said.

Creator Aaron Guzikowski likened Mother and Father to parents using technology as a babysitter. In 2020, parents may let their children watch a tablet. In the future, he imagined, the entire parent can be mechanical.

The androids also can devote 100% of their time to the children. It’s in their programming and they have no needs of their own.

Salim and Collin said their android performances consisted of trial and error as they experimented in rehearsals and on the set.

“There was space to make mistakes, because these two androids are learning, also,” Salim said.

One aspect of android behavior came about on the set. Collin decided not to look at Salim when Father spoke to Mother, because her android character had technologically enhanced hearing. She did not need to make eye contact like a human being.

“It was a great joy to just keep discovering the senses of an android,’ Collin said.

When Mother first gives birth, Father must handle six newborns carefully. As an actor, Salim was nervous about handling the newborn props which he said were delicate to the touch. However, he had to remember Father was an expert, and did not have emotions like fear or anxiety.

“I’ve got massive hands, already, so it felt like I’ve got to be so careful,” Salim said. “At the same time [I had to maintain] complete composure.”

Ridley Scott, known for his futuristic films Alien and Blade Runner, executive produced and directed the first two episodes of the series. Collin and Salim credited Scott with perfecting their android performances, during rehearsals prior to filming, as well.

“A lot of it was workshopping the voice and the cadence with Ridley,” Salim said.

Collin said Scott had the final word on their performance. After he allowed them to experiment with different variations, Scott ultimately chose his preferred performance.

“[Scott] takes responsibility completely for you and your character,” Collin said.

According to Zucker, James saw Collin’s film A Horrible Woman at the Kilkenny Film Festival. She sought Collin out, but Collin recalls having reservations. James sent her a script and scheduled a casting session the following day.

Collin said she initially turned down the audition because it didn’t give her enough time to prepare, but James convinced her to go through with it.

“It was, of course, overwhelming, but also a little bit stressful,” Collin said.