Ever wanted some words of support from your football hero? How about help with a marriage proposal from a famous musician?

Websites such as Cameo and Memmo give members of the public the chance to ask stars to record a shout-out for their friends or relatives, with prices ranging from around £15 to several hundred pounds.

Nigel Farage is one of the latest names to sign up to Cameo – a site which has attracted big stars in the US – with a video from the former Brexit Party leader setting you back £75.

Simon Webbe, who found fame with the boyband Blue, says he charges around £50 for a personalised video on Memmo and he received about 100 requests in the run-up to Mother’s Day. 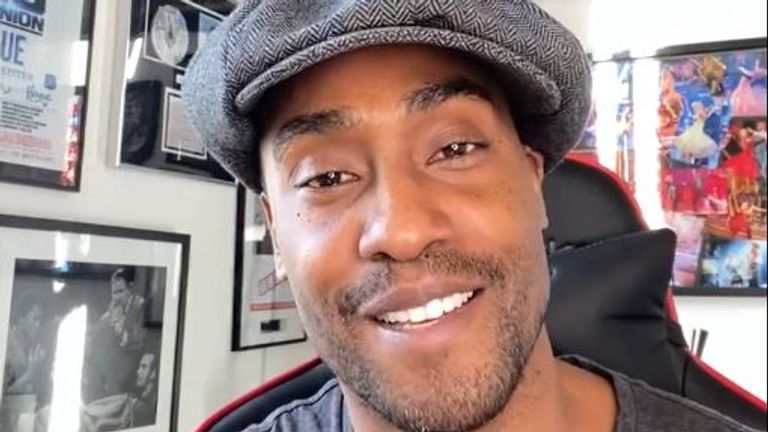 Why are celebrities selling messages?

He told Sky News: “I think a lot of people will be sitting there going: ‘Well, why do celebrities need to be doing this when they make their money?’

“People like myself who’s in the entertainment business, my income relies on people getting together – as you know over the last year we’ve been locked down. The whole world has been like that.

“A lot of my work is international so I’ve not been able to make a living for over a year at all.”

He added: “This is just that little way to earn those extra little pennies if I can put to the side for the mortgage, I’ve got a baby on the way as well, so I don’t think I can afford to be too proud.”

Gustav Lundberg Toresson, one of the co-founders of Memmo, said the number of celebrities is “growing exponentially” and more than 3,000 people are now in their “talent base” offering video messages.

He started the company in Sweden in 2019 with his business partner Tobias Bengtsdahl and hopes to recruit Premier League footballers to the site in the near future.

Ex-England football manager Sven Goran Eriksson and former Geordie Shore star Charlotte Crosby were among the first famous names to sign up, along with a host of retired footballers, Mr Toresson said.

He told Sky News: “There’s a lot of interest in the footballers – a lot of former ones like Glenn Hoddle and Sven Goran Eriksson, but also some interesting characters from TV like Clinton Baptiste (a character from Peter Kay’s Phoenix Nights) and Paddy Doherty (from My Big Fat Gypsy Wedding and Celebrity Big Brother).”

Sir Rod Stewart ordered a video message from an impersonator of the singer on Memmo for his son earlier this year, Mr Toresson said.

The coronavirus lockdowns prompted an increase in celebrities signing up to Memmo because people working in entertainment had “a lot more time on their hands”, he added.

However there has been a similar rise in demand in Sweden, where COVID restrictions have not been as strict as other countries, according to Mr Toresson.

“I think it’s just that talent realise they can actually make a lot of money in their living room – and it’s actually really easy,” he said.

Celebrities decide how much they charge for their videos and use an app to set their price, view their requests and record their messages.

“It’s varying a lot depending on how much you want to adjust the demand.

“We always want this to be up to the talent themselves.”

The celebrities receive 75% of the amount they charge, with Memmo taking the remaining 25%, while some stars are recording 15 to 20 videos a day, according to Mr Toresson.

Birthday messages are the most common requests, and there have been more than 50 marriage proposals where a celebrity pops the question on behalf of the person requesting the video, he added.

One unnamed celebrity in the UK who helped out with a proposal is now planning to attend the wedding after he was invited to the ceremony this summer, Mr Toresson said.

Some of the more bizarre requests have included people asking celebrities to help them break up with their partner.

“The acceptance rates for those ones are lower,” Mr Toresson added.

Memmo says very few inappropriate message requests are received, which Mr Toresson believes is because people have to pay to make a request and they cannot be anonymous.

“In the end it’s always up to the talent to accept or reject the request for any reason,” he said.

“We don’t really regulate who is on and who is not, but we have certain rules about what kind of content you can create on the platforms.

“It’s a huge opportunity to help creators, help celebrities to connect with their fans in a lot of different ways.

“It’s a big opportunity out there.”