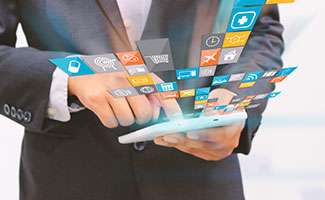 On the eve of the Consumer Electronics Show (CES) in Las Vegas, Samsung unveiled what can only be described as a radical departure from the traditional TV business: a modular TV that can scale to any possible size, giving consumers the ability to buy as many bezel-less modules as they want to combine to a custom-sized screen optimized for their living rooms.

“Screens should not be limited by size,” said Jonghee Han, president of the company’s visual display unit. “Instead, they should blend into any home.”

Samsung still presented the new modular product the way TVs are traditionally being shown off at CES: with an ours is bigger than theirs attitude. The screen on stage measured a whopping 146 inches. It was billed as “The Wall,” with a spokesperson explaining that the company had built it with the size of a typical residential room height of 8 to 9 feet in mind.

But the company is clearly also thinking about giving consumers the ability to assemble much smaller screens, and possibly add to them over time. “This modular screen can transform into any size,” Han said. “This TV’s modular structure allows consumers to build the screen of their dreams,” added Dave Das, SVP of consumer electronics at Samsung Electronics America.

How big or small will that dream scale? Samsung wouldn’t say. The company kept mum on many details, including the size of the individual modules and possible resolutions in different configurations.

Samsung didn’t even let media inspect the device up close, especially keeping nosy photographers at a safe, multiple-feet distance. However, black scenes during the company’s demo video revealed what looked like a series of vertical tiles, measuring an estimated 4 by 8 inches each, or slightly larger than your average phone screen.

Samsung instead emphasized some of the technology behind the screen, including what the company calls MicroLEDs. These are much smaller than the LEDs used in traditional TVs, and also are supposed to be more power-efficient – which could be key to the product’s success, given that Samsung envisions it as a kind of video wall that shows ambient videos throughout the day.

There’s no word yet on how much this modular TV will cost consumers, but Das said that it will be commercially available sometime this year. The company promised further updates in March, when it plans to announce the commercial availability of its regular 2018 TV sets as well.

Samsung first showed off a modular TV on the CES show floor in 2016 . However, back then, the company still treated modular screens as a concept for something that may or may not ever evolve into a product. Now, it seems like Samsung actually believes that it can find a market for such screens.