The 7 p.m. blastoff is slated to deliver the Galaxy 33 and 34 satellites into geosynchronous orbit, where they will help the telecommunications company Intelsat maintain service in North America.

The launch had been set for Thursday night but was scrubbed at 30 seconds to blastoff due to a small helium leak, which triggered the Falcon 9 rocket to automatically abort.

The planned launch follows two others on Wednesday: the launch of a Falcon 9 rocket carrying 52 Starlink satellites in the evening and NASA’s Crew 5 mission, carrying four astronauts to the International Space Station, in the afternoon.

The Crew 5 mission sent an international crew of two American astronauts, one Japanese astronaut and a Russian cosmonaut into orbit aboard the Crew Endurance Dragon spacecraft. The capsule docked with the International Space Station at 5:15 p.m. EDT on Thursday.

The Falcon 9’s first stage rockets from both of Wednesday’s launches were able to successfully land on drone ships in the Atlantic Ocean. 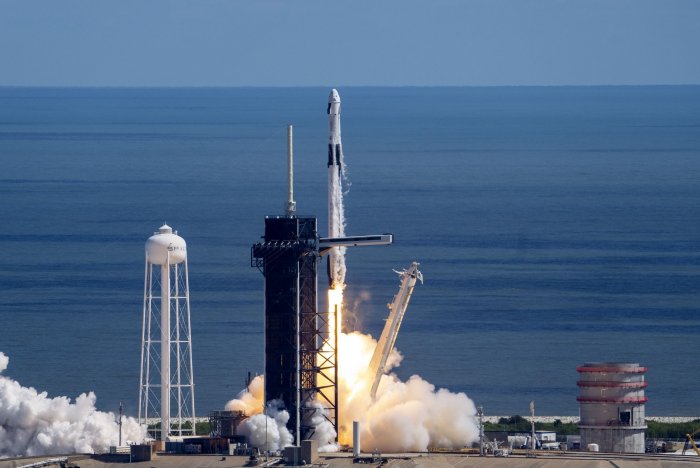 A SpaceX Falcon 9 rocket lifts off from Launchpad 39A at the Kennedy Space Center in Florida on October 5, 2022. NASA’s Crew-5 mission is on its way to the International Space Station. Photo by Pat Benic/UPI | License Photo