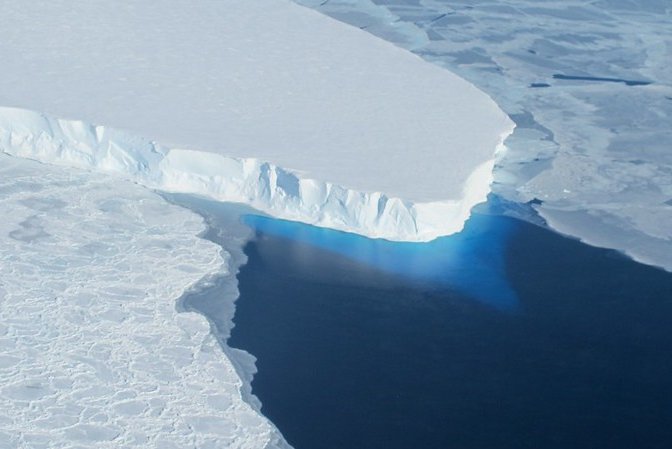 The fresh observations, published Friday in the journal Science Advances, show Thwaites is exposed to larger amounts of warm water than previously estimated.

Thwaites is thought to be one of the West Antarctic Ice Sheet’s most vulnerable glaciers, its location and structure making it especially susceptible to influxes of warm, salty water.

In recent years, scientists have watched its grounding line recede and its height shrink as melting rates accelerate.

To better understand the vulnerabilities of the glacier’s underbelly, scientists sent a remote-controlled submersible named Ran beneath the ice shelf to investigate.

“This was Ran’s first venture to polar regions and her exploration of the waters under the ice shelf was much more successful than we had dared to hope,” study co-author Karen Heywood said in a news release.

“We plan to build on these exciting findings with further missions under the ice next year,” said Heywood, a professor of physical oceanography at the University of East Anglia.

Ran measured current speeds, as well as water temperature, salinity and oxygenation, at a variety of depths beneath Thwaites.

The data helped scientists mapped the movement of underwater currents in the region, revealing a large volume of deep water flowing toward the Antarctic coast from Pine Island Bay — a pathway scientists previously thought was blocked by a ridge.

The discovery suggests Thwaites is vulnerable to a larger supply of warm water than previously estimated.

“The channels for warm water to access and attack Thwaites weren’t known to us before the research,” said co-author Alastair Graham, climate scientist at the University of South Florida.

“Using sonars on the ship, nested with very high-resolution ocean mapping from Ran, we were able to find that there are distinct paths that water takes in and out of the ice shelf cavity, influenced by the geometry of the ocean floor,” Graham said.

Thwaites is one of several coastal glaciers slowing the descent of the West Antarctic Ice Sheet into the Southern Ocean.

Currently, the ice sheet is responsible for just 10 percent of global sea level rise, but that number would surely increase — and rapidly — if Thwaites or one of its neighbors collapse.

The underwater data collected by Ran also revealed a diverse array of meltwater flows surrounding the pinning points, the areas where the bottom of the glacier anchors on the seabed — areas critical to the ice shelf’s overall stability.

“This work highlights that how and where warm water impacts Thwaites Glacier is influenced by the shape of the sea floor and the ice-shelf base as well as the properties of the water itself,” said co-author Rob Larter of the British Antarctic Survey.

“The successful integration of new sea-floor survey data and observations of water properties from the Ran missions shows the benefits of the multidisciplinary ethos within the International Thwaites Glacier Collaboration,” Larter said.

The future of Antartica’s ice sheets, and their influence on global sea level rise remains one of climate science’s largest uncertainties, but the study’s authors suggest the latest data will help them develop more accurate forecasting models.