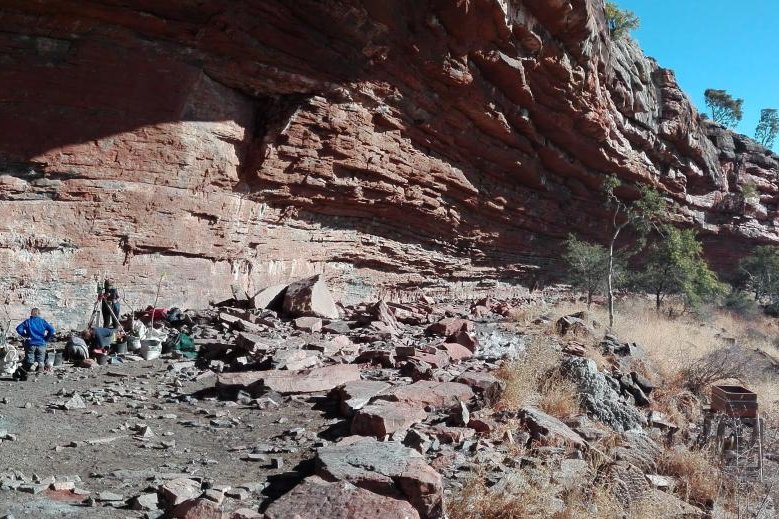 March 31 (UPI) — Archaeological evidence from a rock shelter in South Africa suggests early humans colonized a variety of environments, including inland settings, undermining theories linking the origins of our species to the coast.

For generations, the rock shelter on Ga-Mohana Hill, positioned at the edge of South Africa’s Kalahari Desert, has served as a spiritual site for local people. But until now, researchers weren’t sure how long the shelter has been used by humans.

To find out, archaeologists excavated a collection of white calcite crystals and ostrich eggshell fragments, thought to be used as water vessels.

Researchers detailed their excavation and analysis efforts in a new paper, published Wednesday in the journal Nature.

“The crystals point towards spiritual or cultural use of the shelter 105,000 years ago,” co-author Sechaba Maape said in a news release.

“This is remarkable considering that site continues to be used to practice ritual activities today,” said Maape, a researcher at the University of the Witwatersrand in South Africa.

Scientists were able to estimate the age of the crystals by analyzing signals produced by light exposure in sedimentary quartz and feldspar grains.

“Our analysis indicates that the crystals were not introduced into the deposits via natural processes, but were deliberately collected objects likely linked to spiritual beliefs and ritual,” said lead author Jayne Wilkins, archaeologist at Griffith University in Australia.

Researchers imaged the grains and their geochemical signatures using the Optically Stimulated Luminescence, a powerful laboratory instrument at the University Innsbruck in Austria.

“You can think about each grain as a miniaturized clock, from which we can read out this natural light or luminescence signal, giving us the age of the archaeological sediment layers,” said co-author Michael Meyer, head of the OSL Laboratory.

The name Kalahari comes from the Tswana word Kgala, which means “great thirst,” but paleoclimate data suggests the semi-arid landscape once hosted an abundance of water.

“This is a story of water in what we know now as a dry landscape, and of adaptable people who exploited the landscape to not only survive but to thrive,” said co-author Robyn Pickering, director of the Human Evolution Research Institute at the University of Cape Town.

Previously, archaeologists have recovered evidence of early human activity from a variety coastal sites in Southern Africa, but the latest findings suggest our early ancestors were not confined to the coast.

“Our findings from this rockshelter show that overly simplified models for the origins of our species are no longer acceptable. Evidence suggests many regions across the African continent were involved, the Kalahari being just one,” Wilkins said.

“Leaving no visible trace and working with the local community is critical for the sustainability of the project,” Wilkins said. “So that Ga-Mohana Hill can continue to provide new insights about the origins and evolution of Homo sapiens in the Kalahari.”