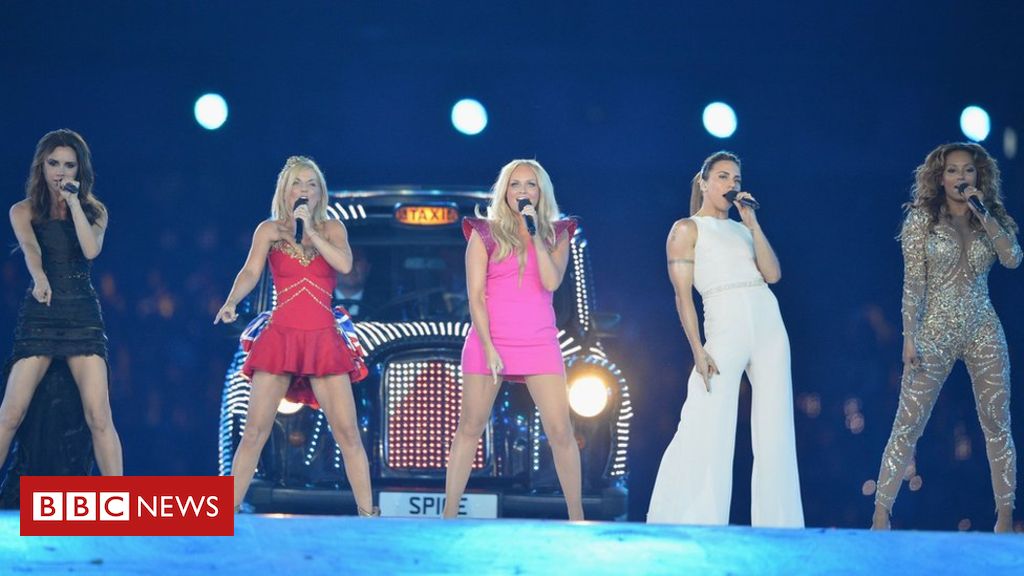 “If you wanna be my lover, you gotta get with my friends, make it last forever, friendship never ends”.

It is a lyric that many who grew up in the 90s are able to recite by heart.

The line, sung by the Spice Girls on their 1996 breakthrough single Wannabe, summed up the band’s self-styled ‘Girl Power’ mantra – a brand of female empowerment that made them a global pop culture phenomenon.

And now they, together with a whole new generation, have a chance to relive the mania all over again.

The four did so without Posh Spice aka Victoria Beckham for the first time, but her absence has done little to deter sales, with a string of dates, including three nights at Wembley, already sold out.

So, how can we explain the Spice Girls’ influence two decades on, and where does Girl Power fit into a post-MeToo world?

‘Kicking it for the girls’

As with most major cultural shifts, the roots of The Spice Girls’ ethos formed in unlikely fashion within underground culture – namely the Riot grrrl feminist punk rock movement that spread across America in the early 90s.

One of its biggest bands, Bikini Kill, released a zine called Girl Power in 1991, mirroring the attitude of frontwoman Kathleen Hanna.

“Hanna famously called for ‘girls to the front’ at gigs, says NME’s El Hunt. “Riot grrrl bands in general were very focused on making space for women at gigs. They understood the importance of giving women a platform and voice to speak out against abusers.

“For a lot of young women and girls, who probably weren’t following the Riot grrrl scene at all, The Spice Girls brought this spirit into the mainstream and made it accessible.”

Their version of Girl Power delivered on Horner’s promise to give feminism a “kick up the arse”, at a time when lad rock dominated the charts and men’s magazines, openly objectifying women, were peaking.

When asked in 1997 what the term meant, Brown replied: “It’s about spreading a positive vibe, kicking it for the girls… It’s not about picking up guys. We don’t need men to control our life. We control our lives anyway.”

Nowhere was this more evident than in the band’s Spice World movie, where Ginger scares off a potential lover by mentioning the word feminism. As he runs away, the ladies laugh him off-screen.

“I do think that Spice Girls showed an alternative; and it did parody many of those rock and roll cliches in a very progressive and humorous way,” says Hunt.

But, for many young fans at the time, there was also a simpler appeal – the Spice Girls inspired confidence. Friends as a group, but diverse an individuals, there was someone for everyone.

Harriet Allen, who went to one of the Wembley shows with her cousins as a child in 1998, remembers: “Everyone had a Spice Girl they wanted to be. I was Baby as I was the youngest, she was the innocent and sweet one! I remember that they all got on so well – full of life and energy. They were the big sisters I never had.

These spanned the ages, from the childish rat pack fun of Wannabe to the teen-orientated messages of self-respect and sexual consent in Stop and 2 Become 1.

But critics see a different, more cynically-marketed, side to the group’s Girl Power – a commercial product, created by men, to sell an illusion of feminism.

In 2017, Garbage’s Shirley Manson, a prominent face of British 90s alt-rock feminism, told Vice she found the Spice Girls “abhorrent” at the time.

The band were indeed initially brought together by men. Original managers Chris and Bob Herbert advertised for a “street wise” female group in their talent search.

As the band smashed sales records worldwide, their second manager, Simon Fuller, signed the group up to a dizzying number of deals – including a multi-million mega-partnership with Pepsi.

However, this doesn’t quite tell the whole story. It was Horner, not a man, who came up with the band’s original name Spice. She “knew exactly what she wanted and how it was all going to look, probably even more so than I did at the time,” Chris Herbert has said.

“Maybe it was a male-led construct, but not in the way many people assume” reflects O’Connor.

The group have said previously that it was the sexism they faced themselves in the industry that sparked the Girl Power message. Even though every member had to adopt a moniker and fashion persona, this sent a message about individuality.

And before that, she says, they were ambitious. “They wanted to be famous and successful and they worked hard to achieve that – considering ambition in women is still considered a negative trait, that was another empowering thing to see”.

So, as they re-enter the fray, where do the Spice Girls fit into to today’s pop scene?

Their most obvious heirs, pop group Little Mix, count them as a direct influence, while Adele has made no attempt to hide her love of the band.

But culture is different. While their messages of equality remain more relevant than ever post-MeToo, their method of protest – living seemingly wild and care-fee – feels outdated to some.

How does Harriet Allen view the shift, 20 years on from seeing the band?

“They need to evolve” says Allen. “Girl Power needs to be so much more than just having an Instagram perfect life. It was a bit of a bubble”.

The years since the band’s original split, hastened by the shock departure of Horner in 1998, has revealed tensions – from struggles with eating disorders to bullying – that were, at the time, kept under wraps.

Little Mix, meanwhile, have made powerful statements about body-shaming and anxiety on social media to deliver a different kind of authenticity.

Penny Andrews, a long-time fan who will be attending this summer’s reunion tour, says that, while the contemporary frankness around body image and mental health is alien to band, their message of sisterhood remains clear.

“The way the girls have rallied around Mel B, who following trauma from domestic abuse, has found her friends are there, is a model we should all respect.”

“The Spice Girls weren’t perfect and they certainly weren’t polished, but that was and still is part of their appeal.

“To err is human, the saying goes, but society did and still does expect women to be perfect. The Spice Girls were a direct rebuke to that.

“Acts like Little Mix and Dua Lipa follow that example – their music is about making mistakes and learning from them, and having friends to help you on the way.”