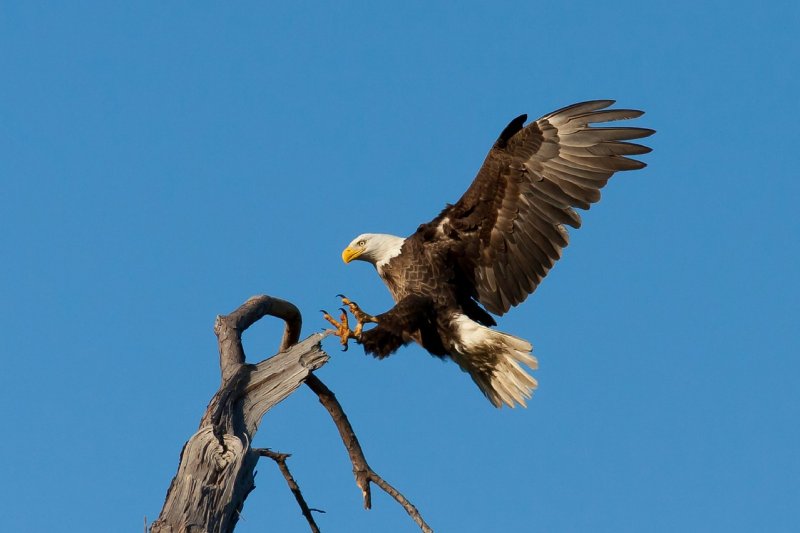 April 7 (UPI) — Scientists found rat poison in the systems of 82% of the few hundred dead eagles examined for a multiyear survey between 2014 and 2018.

The survey results, published Wednesday in the journal PLOS One, are a reminder of the lurking threats that face even the most well-protected animals.

“Generally, bald eagle populations have been thriving in the United States. This is great news and a conservation success story,” corresponding author Mark Ruder told UPI in an email.

“However, as wildlife health researchers, we are always concerned about the health of wildlife, including eagles. We live in a changing world and the human population puts a lot of pressure on our natural resources,” said Ruder, an assistant professor at the University of Georgia’s College of Veterinary Medicine.

For the survey — officially, the Southeastern Cooperative Wildlife Disease Study — scientists collected and analyzed the diagnostics records of more than 300 deceased eagles.

The data showed an overwhelming majority of surveyed eagles had rat poison in their systems. Scientists blamed rat poison exposure, or anticoagulant rodenticide toxicosis, for the deaths of 12 eagles, or 4% of the examined eagles.

As previous studies have shown, population declines are rarely traceable to a single cause, which is why scientists are keen to keep close tabs on the many ways human pressures are affecting wildlife health.

“Many wildlife populations face tremendous obstacles now, or in the future, which are unrelated to disease, such as habitat loss, fragmentation, and degradation,” Ruder said. “Being proactive to identify additional disease threats to populations may help to get in front of a problem and minimize negative impacts in the future.”

Although eagles have made a tremendous comeback across North America over the last half-century, local threats remain.

In Wisconsin, scientists have discovered a deadly virus spreading among eagles.

Researchers have been tracking a deadly brain disorder caused by blue-green algae that is decimating eagle populations in pockets of the American South.

Now, the latest findings suggest rat poison exposure is common among eagles across the country.

“This may range from controlling mice and rats inside and around structures in urban settings to controlling prairie dog populations in the Western United States. The applications are quite variable, but wherever these compounds are used, there is potential for non-target wildlife exposure and intoxication. This is not isolated to eagles, it is well-documented in a variety of raptor species and also occurs in mammals,” Ruder said.

They said they also hope to investigate the sublethal effects of rat poison exposure on the health of eagles and other animals.

“Even when a particular wildlife species appears to be thriving, it is important to define causes of mortality,” Ruder said. “These animals live in a changing world, one that is significantly impacted by humans.”

“Causes of mortality, such as pathogens and toxicants, can often be additive and we need to be proactive in identifying potential threats to wildlife now and looking in the future,” Ruder said.